When I (finally) got home last night, I covered the outside couch with a plastic drop cloth, even though it was a beautiful, clear evening and the moon was smiling down on me: 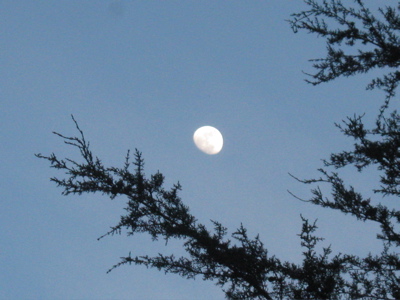 The forecast said 100% chance of rain, and they were right: I woke to ran pattering on the plastic and the plants. I won’t have to water the garden today.

Speaking of the garden: Rob dropped by last night and we talked about making a bent wood trellis. I lent him the book, so I’m hoping we might get it done this summer. My idea is to have the trellis (and whatever I’ll grow on it) hide the decrepit trailer full of Rose’s pottery which Mark may or may not have time to empty out and/or move one of these days.

Rob also fastened some mesh to the underside of the balcony, so the jasmine that’s growing beneath: 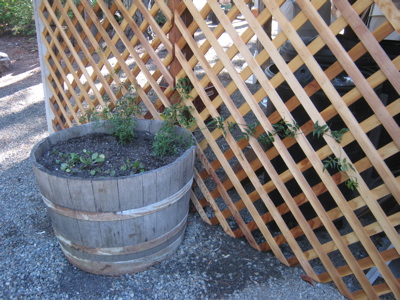 can wind its way up to the balcony itself. I love the idea of a jasmine-covered balcony.

Last night, I suddenly realized that I had missed my own blogaversary! I even had to look back in my archives to find out what day it was. It was April 20, for those of you who keep track, and my blog is now 12 years old. Or my approximate mental age. Pretty soon it will be pestering me for a driver’s license and an overpriced prom dress and developing the surly attitude beloved of teens everywhere.

You have been warned. 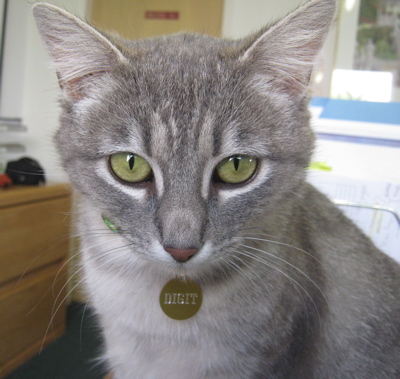 Digit on my desk. Note the name tag!

Digit’s first week as our Office Cat was a success, at least as far as her human colleagues are concerned. I was happy to hear that everyone but Me stopped in to see Digit on the weekend. It turns out that our IT guy comes in pretty much every weekend (who knew?), so she will always have some company.

She is still completely uninterested in making a break for it, which is great considering how often people are in and out of there during the work day. She always greets me with a purr and rolling over onto her back to have her tummy petted. She’s good at playing by herself, chasing a toy (or her tail) around the office.

On the Saturday after the Girl Day, we had the first family barbecue of the year. We had it in the huge (40 feet by 40 feet) new garden on the family property, which is an amazing work in progress. it’s taken a couple of months to get to where it is now, deer-fenced and gated and planted with fruit trees and almost every vegetable you can think of.

We were joined by friends, including Lichen, though it was unfortunately too windy to cut my hair. We perched on hay bales and drank wine and ate like kings and queens: turkey burgers; marinated, grilled peppers and summer squash; my famous potato salad (mayonnaise free for the picky eaters among us); as well as mixed olives and marinated artichokes.

It was a great evening.