I realize it’s almost this weekend, and I haven’t told you about last weekend yet. Let’s look back, back…a long time ago, about last Friday.

It was the first farmers’ market of the year, and it was a beautiful, sunny day. The market was less crowded than it will be when summer really begins, and it was nice to wander about in comfort. I picked up a fresh baguette (to go with the black bean soup I had made) and some cherries, the first of the season: 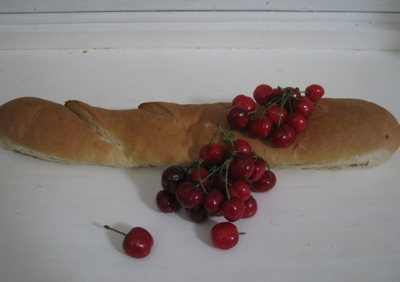 After that, we stopped by the garden center and picked up several bags of chicken manure. Folks, don’t try this at home. I washed my hands six times after helping Megan to load the bags in the back of the truck, and I could still smell it. All the perfumes of Arabia couldn’t sweeten my little hands. Megan laughed at me.

We also got fixin’s for a BBQ the next evening and bought some redwood boards, which was harder than you’d think, especially since we live in the heart of redwood country. But the pretty boards were warped, and the non-warped ones tended to have fatal flaws, like a giant crack or way too many knots in them. We were looking for six 10 foot long boards. The guy at the lumber yard was really helpful, looking through board after board. Finally, we found two decent 10s and some decent 20s, which he cut in half while Megan paid for them. He even cheerfully loaded them into the stinky truck.

The Derby has to be the best sporting event EVAR. Can you name another one where there is a red carpet with celebrities, fabulous hats, daytime drinking is positively encouraged, and it’s over before even I have a chance to get bored? And then there are the gorgeous, glossy horses and the winner being draped in roses.

This year, the delightfully named I’ll Have Another won at 15-1 odds, the first horse in Derby history to win from post position 19. His jockey, appropriately enough, was 25 year old Mexican native Mario Gutierrez, making a memorable debut at the Derby after winning Santa Anita last month. I bet he had another!

We had expected company for dinner, so Megan and I bought a pork roast which I marinated in lime juice and spices on Friday, thinking it would be a good choice for a crowd to make fajitas. We hadn’t even thought about it being Cinco de Mayo, but it worked out well that way. Birthday girl Star celebrated spending half of her life in love and safety, where she will remain for the rest of her life. She patiently waited for her birthday dinner: 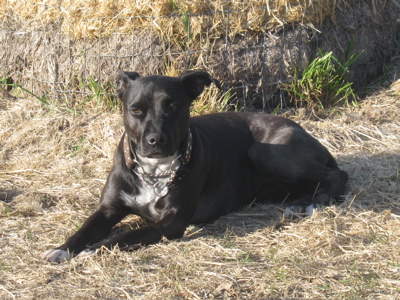 Other than Star, it ended up just being Jonathan, Megan, and me. We slow cooked the pork roast in foil over the coals, then grilled red peppers and rd onions and had it all with salsa in handmade tortillas by the fire as the sun slowly faded over the garden. We talked about the past and the future, sitting in the garden they have worked so hard to create. Looking at the faces of two people I love most in the world, I thought, “I love my life.”