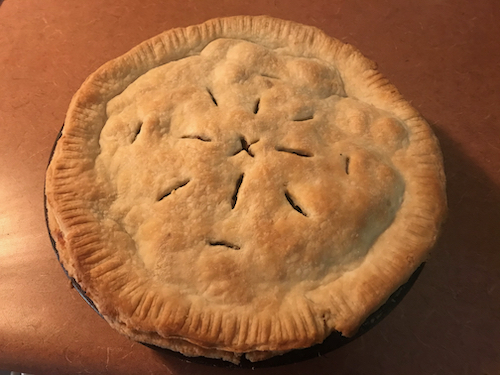 I have been spectacularly demotivated in the kitchen lately. I have not lost my enthusiasm for trading recipes with my BFF Alice and reading them in the missives from the New York Times Cooking editors, but there seems to be a long way between interest and execution these days.

I have been meaning to make my own falafel (how hard can it be?) and tabouli*. I went so far as to get dried chickpeas for the falafel – apparently, using canned chickpeas is the Number One reason that home-made falafel fails – and bulgar wheat for the tabouli, but they continue to languish in the Closet of Doom, alone and unloved. Tidying up the Closet of Doom is another project that I have failed to complete and which remains on my ever-cluttered radar.

While it’s still spring and rhubarb is still in season, I intend to try a recipe for roasted rhubarb cobbler. At least I have not bought the rhubarb for it, since it would likely end up in the compost, where it would probably not delight the ravens and foxes. One of these days/weekends/maybe never…

But for some reason, on Sunday, I decided it was time to make the tourtière that has been under consideration all year. I originally planned to make it for New Year’s, but that resolution faded before the year began, quite possibly a personal best (or worst?) for not keeping a resolution. That sunny Sunday morning seemed like the perfect time.

I used a new to me recipe for the crust, which includes a tablespoon of cider vinegar, and I think that makes it extra flaky. I pulsed everything in the food processor, which makes it easier.

While I was rolling out the crust, I heard a thud. I went over to the sliding glass doors next to the kitchen counter and saw that a very small, very bright yellow-green bird was lying on the deck, having flown into the glass doors. My heart sank, and I thought, That’s a bad sign. It made me sad to see that poor little guy out there. Clyde and Dodge were both fascinated, and for a fleeting moment, I considered letting them out there to put the injured bird out of his misery. I hated to think of him dying slowly out there.

I went back to the pie making, and after a while, checked on the bird. He had moved to a different part of the deck, so I began to hope. After I put the pie in the oven, I looked again, and he was gone! He had recovered enough to fly off! It made me really happy. I’m glad he’s out there somewhere, singing.

*I learned how to make this from another high school friend when we were still in high school. Her father was from Beirut. He used to grow carnations, and when I went to her house, he would always cut some and give them to me, saying, “For you. Very beautiful.” I never knew if he meant me or the carnations.

A YEAR AGO: Celebrating Dodge’s birthday.

FIVE YEARS AGO: A busy, but delightful, weekend.

FIFTEEN YEARS AGO: Dreaming about Mom.

TWENTY YEARS AGO: Oh, the things you see in San Francisco when you are out and about when night meets day!