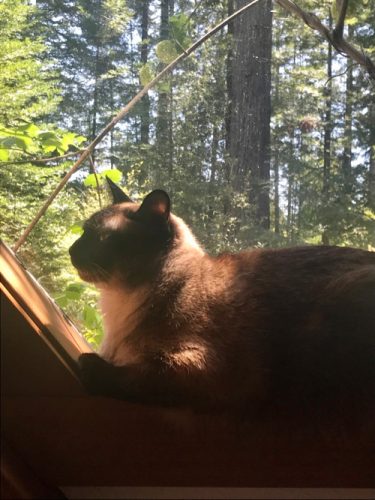 Since I don’t know Dodge’s actual birthday, I gave him my American grandfather’s birthday, May 11. Hoho, as we called him for his frequent and distinctive laugh, loved cats, and I have many pictures of him with long-ago cats, especially Smoky, the grey cat he and Nana had when Mom was young. They loved that cat so much that they still had his bed up in their attic when I myself was young, more than 30 years later.

Hoho was always a bit of a rascal too, so I think he would have enjoyed knowing Dodge, the former street cat.

This summer marks two years since Dodge followed my co-worker Susan home from the car dealership and made his way into my heart and home. He was two or three then, so that means he’s four or five now.

He certainly looks healthier and happier now than he did when he first appeared. Then he was painfully thin in both body and fur: 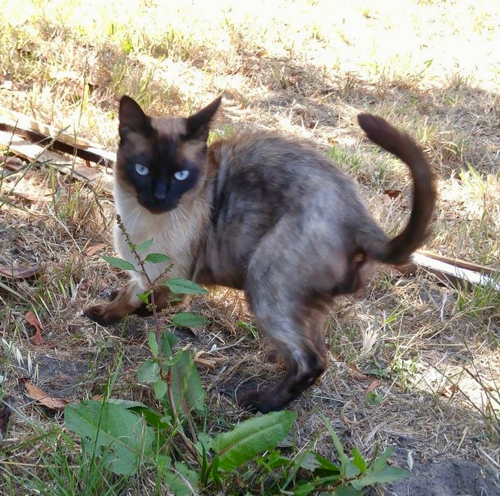 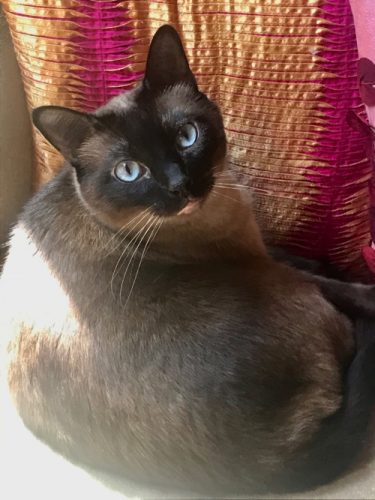 He is also such a happy boy. I have never had a less neurotic cat, despite his unfortunate start in life. He is not very interested in food, despite being starved. Maybe just knowing there’s always food now is enough for him. He is friendly to anyone and everyone, and still has his endearing habit of jumping up while simultaneously rubbing against you. He has an incredibly loud purr, and is very attached to Clyde.

Clyde loves him right back. When Dodge has escaped from the house, Clyde looked for him anxiously and when he came back in, sniffed him all over carefully to make sure his little brother was safe and sound. They often curl up together: 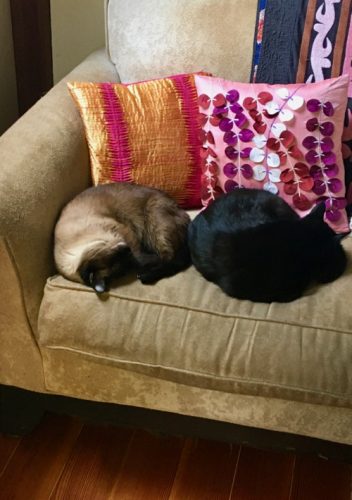 and play together. I think Clyde is very happy to have Dodge in his life after losing his unforgettable brother Roscoe, and I feel the same way. As soon as Dodge took one look at Clyde, he was determined they’d be friends, and he was right.

As for Audrey….well, she takes a dim view of the interloper. To be fair, she is also not a big Clyde fan, despite his always elegant attire and incredible cuddliness and cuteness. I really think she only tolerates me for the food, treats, and litterbox services I provide. Audrey is nondenominational in her overall grumpitude.

A YEAR AGO: Nothing like a flood in the bathroom to make you feel like it’s time to move!

FIVE YEARS AGO: Attempting to come to terms with the grind.

TEN YEARS AGO: An evening with Audrey.

FIFTEEN YEARS AGO A bemused witness to a somewhat surreal fashion show for dogs. Yes, dogs. Yes, with tiaras.