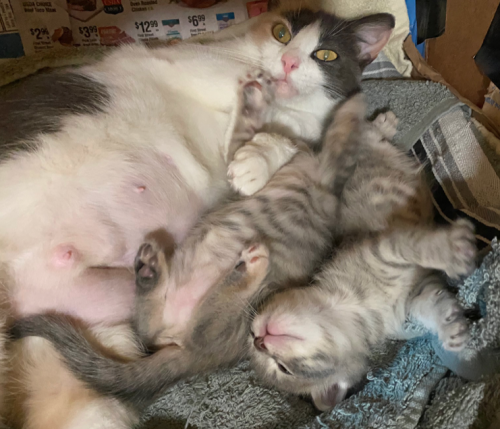 Willow and her babies

I realize that I have been holding out on you. I have access to nearly unparalleled kitten cuteness, but yet have not shared it. I hope you can forgive this shocking oversight.

You may remember that when John and I were married, we disagreed slightly on the correct amount of cats for our household. My number was around the 2 range, and his was more like 8 is almost enough. We compromised at 4. Now that we have our own households, we have stayed true to our individual beliefs. I have three*, and he has…well, I’m not exactly sure, but I think it’s around the 6-8 mark. He takes excellent care of them and they are well and happy.

He also looks after the neighborhood strays, trapping them to get them spayed and neutered and finding homes (other than his) where possible, in addition to supplying food, water, and home-made shelters for the strays who live in a colony near the Home Depot in his city.

He recently came across a pregnant young cat, and earned her trust enough to catch her and take her home. She was examined by John’s vet, who opined that the babies would come along soon. John was always a bit envious that I was there when Buddy was born, saw his first breath (and his last – the whole wonderful journey), so he was pretty excited about seeing the kittens arrive, which two did in due course.

He was concerned about the mom cat, who he had named Willow, and correctly so, since Willow had two babies still inside her which hadn’t made it and had to be surgically removed. They spayed Willow while they were at it, and that tough little lady nursed her two beautiful little kittens despite her surgical scars, as you can see here. She is a good mother, and the vet estimates her to be about two years old, so this is likely not her first litter, though thankfully it is her last.

John decided to keep Willow, though he claims he is going to get the babies adopted when they are old enough. I named the dark, stripy one Daisy, and she seems to be the bolder of the two, and he named Peach, who is lighter in color and more playful. I pointed out that the names have a botanical theme, and that the kittens’ names are old-fashioned slang for cute and/or awesome.

So without further ado, here are some kitten movies and pictures to make your day.

John says Willow turns into “super protective demon Mom” when he changes the towels in the nest and is a formidable opponent: 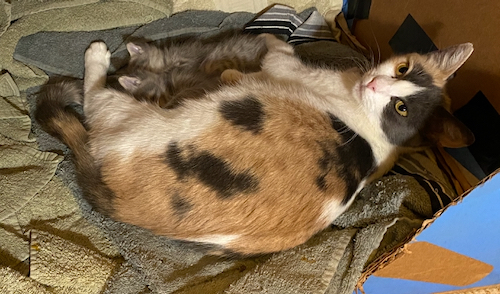 *Can you blame me? You’ve seen how irresistible Dodge is!

A YEAR AGO: Marking a decade in Hooterville.

FIVE YEARS AGO: A BBQ with an old friend and up close and personal with my old friend the Moon.

TEN YEARS AGO: A less than stellar day.