It was dark and stormy last week. We got about 10 inches of rain in a week, 6 of it over the course of two or three days. I later learned that this unenjoyable weather is called an “atmospheric river”. I think this is the California version of the polar vortex that afflicts the east coast in the winter. Also that the Groundhog had no idea what he was talking about.

The ocean was brown from the churned up rivers emptying into it, the road to Civilization was under 14 feet of water, and there was widespread flooding in the inland parts of the county. Even the schools were closed. It seemed like a good time to spend the night in town and check out an inn that recently opened overlooking the harbor.

I was disheartened to receive an LED lantern upon check in, since this meant that they either had no generator or only had one to power their office, as I experienced a few years ago when I stayed in town on a stormy night, only to be kept awake by a generator blasting all night that did not do anything for me. I could have had that experience at home for free, since it was back in the days when Mark was still here and started up his generator the second the power went out, possibly before calling PG&E to notify them of the outage.

Even though it was raining sideways, I dared to hope that the power wouldn’t go out. The room was quite lovely: 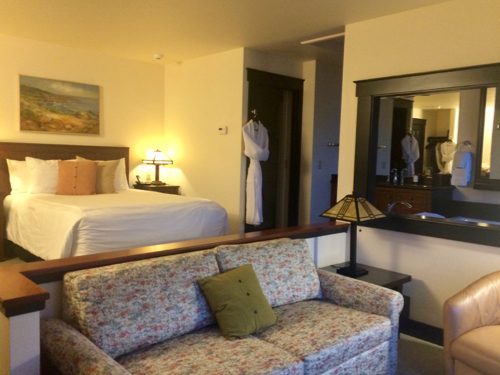 overlooking the busy harbor, where I could watch the boats go in and out and hear the characteristic sounds of sea lions and fog horns, which always remind me of San Francisco. 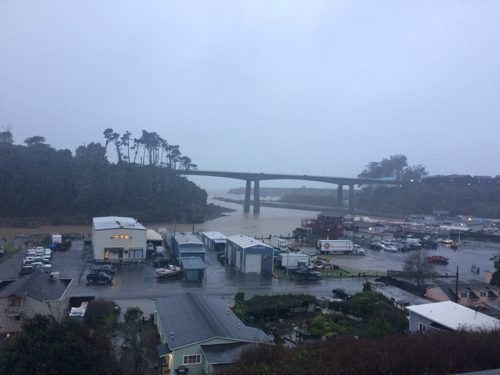 There was a sitting area overlooking the little balcony and harbor, complete with a gas fireplace: 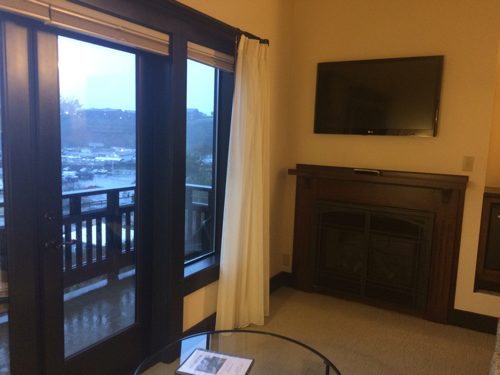 And a giant tub with the same view: 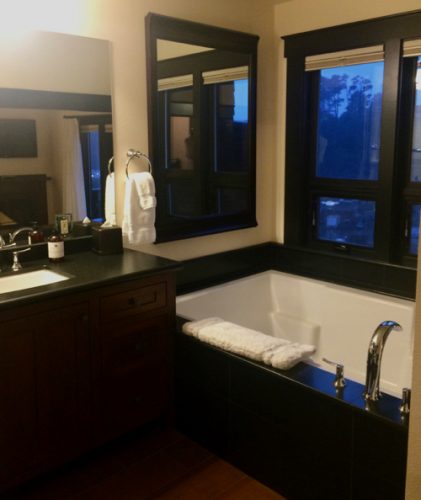 It was thoughtfully provided with a hand shower, the thickest towels I have ever seen, and a comfortable, warm robe with a towel lining.

The inn has a restaurant on site, and I thought it would be a good idea to have dinner there and just walk back to my room. It turned out that this was not the best idea I ever had, and not (just) because I walked there and back in the driving rain and was soaked (though that didn’t help, either).

The restaurant is very pretty, and I later learned that a friend of mine had collaborated with the architect to create the restaurant and bar area. My table overlooked the river, and I could see there was outside seating for when the atmospheric river wasn’t soaking everything in sight. It would be a nice view.

Despite the fact that there were maybe four other people in the restaurant, it took 20 minutes before the pretty hostess took pity on me and asked if I’d like to order a drink. I ordered some wine, which arrived quickly, and then I waited some more. Finally the server arrived and asked if I was ready to order. I asked her what the specials were, which may be a first in restaurant history. I placed the order and had yet another long wait.

When it eventually arrived, the sole Meunière looked very nice: 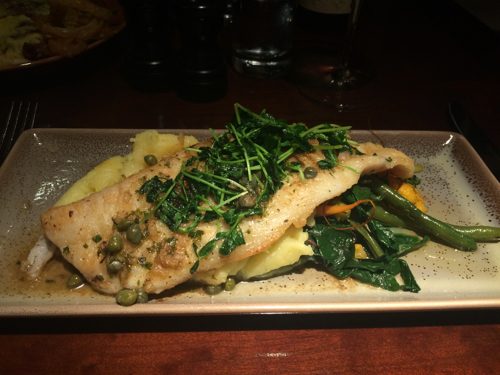 But there was no sign of the crab it allegedly contained, not to mention the Meyer lemon reduction. It was bland, disappointing, and very expensive. A friend later pointed out that hotel food is often this way, and I will keep that in mind going forward.

On the (literally) brighter side, the power stayed on, and I was able to enjoy some wine by the fire, watching the harbor lights and listening to music. In the morning, I headed to the ever-awesome Eggheads for eggs Benedict, starring the world’s best Champagne Hollandaise sauce. Since it was a winter Wednesday, there was no line and a booth was available. The server was just a delight, and though much younger than the server at the hotel restaurant, she could have taught her a thing or two about good service. And the food was as wonderful as always. On the whole, it was a nice break.

A YEAR AGO: A look at Rob’s amazing artwork.

FIVE YEARS AGO: Angelika worked her magic. I am due to see her this coming weekend, too!

One thought on “Break”