I continued my course of therapeutic frivolity by leaving work early the Friday before the long Memorial Day weekend and heading to Angelika’s little salon in the big woods: 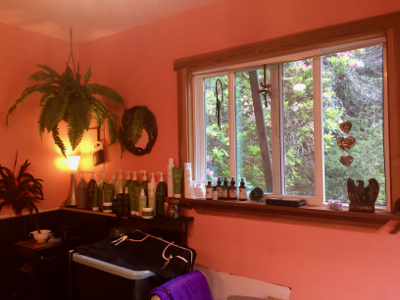 To be fair, I had planned the haircut long before the tragedies hit, but the timing could not have been better. I was surprised to see that Angelika had cut her long blonde hair to a cut similar to Robin Wright’s in House of Cards. It looked great on Angelika, very stylish and pretty.

I was very happy to see her dog Anasazi, too. When I last saw Angelika in March, she was planning to put Ana to sleep due to her issues with her hips and balance at the age of 13. When the vet came to do the deed, she said that Ana was not yet ready to start her next adventure, so hopefully Ana will be with us through the summer and maybe beyond.

It was nice to get such happy news, and to watch a Steller’s Jay taking an enthusiastic bath in the bird bath outside the salon window. Angelika’s garden was full of blooms, from the rhododendrons you can see peeking through the windows to the irises outside the salon: 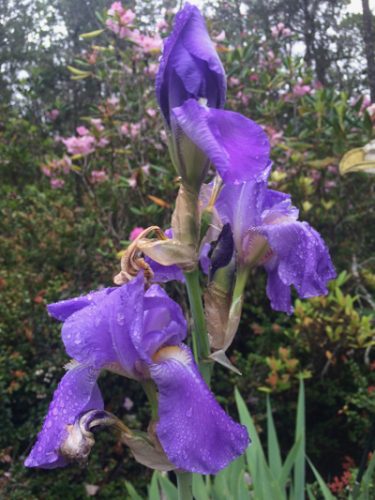 It was a relaxing and rejuvenating to spend time with Angelika. She sent me on my way with a hug and birthday gifts for both Megan (whose birthday it was) and me.

Since it was Megan’s birthday, my new haircut and I met her at our favorite seaside bar, where our favorite bartender started us off with free glasses of birthday champagne, which I think we all can agree is the best kind, to inspire us while we decided on the next drink.

It turned out to be a Lemon Drop: 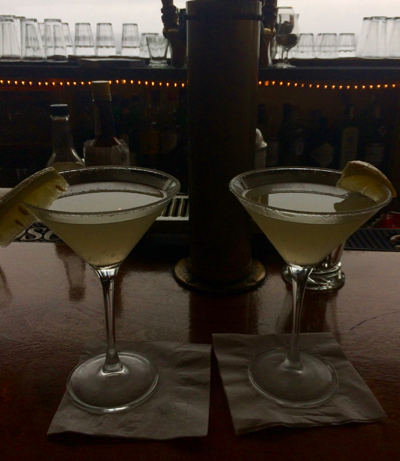 and it was delicious. It was great to chat with the bartender and enjoy our drinks despite the cloudy weather. Later we moved the party to my house, where we stayed up later and possibly enjoyed more adult beverages than we should have, but after all, it was a special occasion.

A YEAR AGO: Celebrating Megan’s birthday on the family estate.

FIVE YEARS AGO: Megan’s birthday was both festive and eventful.