It may be appropriate that the days leading up to Dad’s birthday had such English weather, raining like crazy one minute, sunny the next, then hailing. Inland, there was snow, and it seems that all this late season precipitation may help to keep us from drought status.

Fortunately, the sun was peeking through the clouds when Megan and I arrived at our favorite seaside bar, which had been closed for nearly a month to repair its floors and opened just in time for Dad’s birthday eve. Strawberry margaritas were the special of the day, and what could be more festive than that? Especially since they were the size of young swimming pools: 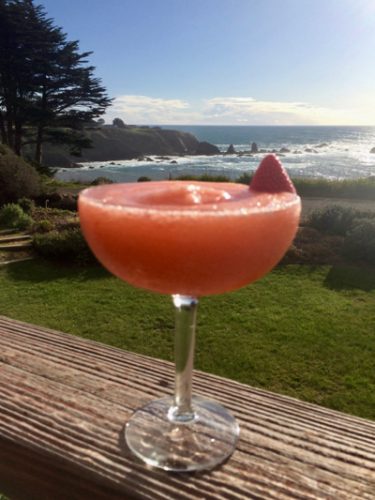 Dad’s birthday fell on a Saturday this year, the perfect day for family dinner. I seemed to be feeling the occasion this year, since I polished the silver napkins which are engraved either “Madame” or “Monsieur”, and Megan hauled down both the big chest of Grammie’s ivory-handled silver and the little chest containing the ivory-handled fish set. The fish set was presented to Grammie by Daddy’s Daddy on the Christmas before their wedding. There is a little slip of paper inside which reads, “To Marjory, from her loving fiancé Ernest. Christmas, 1923”. I treasure that little piece of paper*.

I put all this, the grocery shopping I had done for dinner, and the first two seasons of “Alfred Hitchcock Presents” into a box to bring over to Rio’s place, where the party would be held. Jonathan really wanted to watch the Hitchcocks on the Predicta after dinner. We made our way through the winding woods to Rio’s place, where I set to work as Jonathan and Megan fetched home-made cider.

Here is the menu.

Not listed, but still appreciated, were the tarts Jonathan and Rio made from the peaches we grew and froze last year: 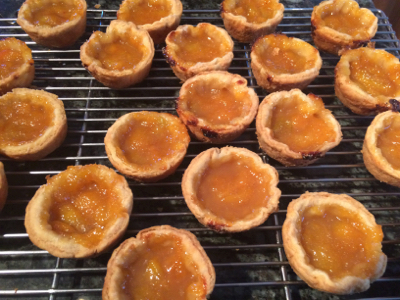 They were as delicious as they look.

Rio’s kitchen is much more reasonable than mine, and although it was unfamiliar, it was pretty easy to make dinner there. Also, the kitchen is open to the living and dining areas of the house, so we could chat as I cooked and asked where things were as Gilbert & Sullivan played cheerfully in the background. Dad loved G&S, and used to sing it merrily despite being tone deaf and having a singing voice to match. He was actually removed from music class at school and sent to learn woodworking, which was more useful to him (and us), since he built bookshelves in every house we ever lived in.

Here’s the salad, with a fork from Grammie’s fish set, along with the napkin rings and the regular silver: 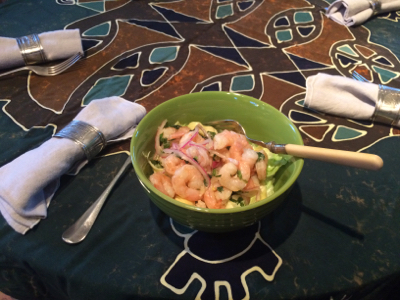 And here is the pilau, in progress on the stove: 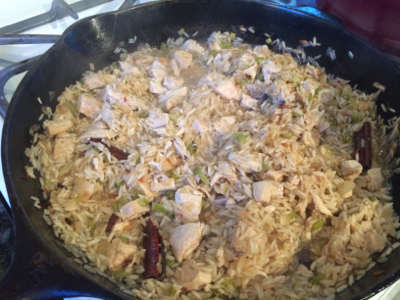 It was a good dinner. I was glad to cook from Dad’s cookbook and to enjoy the company of my much-loved family while reminiscing about Daddy. The old man wasn’t so bad!

*When Dad and I were in Russia in 1992, his wallet was stolen. Dad kept all of his money in his money in a money belt when traveling abroad, so the thieves only got a credit card which Dad promptly canceled before they could use it**. But the wallet did contain a little hand-written prayer that his mother had given him on the day he went off to university, and that he had carried with him ever since. That was all he cared about.

**He once had a credit card stolen and waited a few weeks to report it, since the thief was spending less than my mother did.

A YEAR AGO: Celebrating Dad’s birthday in many different ways.

FIVE YEARS AGO: An early start to Dad’s birthday. And some cooking, of course.

TEN YEARS AGO: A menu meal for Dad’s birthday.