I think I can safely say that I survived The Plague. I was laughing at myself when I was running around cleaning my bathroom before getting ready for work on Friday. I figured I must be feeling better if I actually cared what the house looked like. When I was sick, I could not care less and anything and everything seemed like a giant effort, from getting dressed to breathing. For some reason, I had a fervent fantasy that day of coming home to a tidy house. I love it when my fantasies come true.

The next day I had a cooking marathon, including Ottolenghi’s mejadra and All’Amatriciana sauce for pasta, so you know I’m back.

Mark’s dogs were back in force yesterday. I was too slow getting out of the car for Kovu’s taste, and he leaped in joyfully. Fortunately for the health and welfare of my work wardrobe, the muddy paw damage was confined to my winter coat.

Usually, they trot off homewards after telling me how glad they are that I have returned, but yesterday, they decided to hang around. They apparently wanted to come in the house, since the whole herd hung out on the back porch, some of them barking, which drew Audrey’s irate attention. She was incandescent with rage that they dared to be on her turf, and she was growling louder than they were barking. She puffed herself up and kept flinging her small but furious body against the sliding glass doors, making them shake. Here she is preparing for another assault: 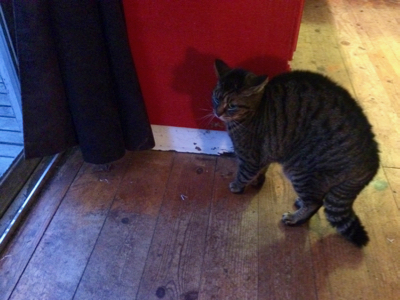 Note the puffy tail and air of fury.

Clyde withdrew to the stairs, his eyes huge, where he could watch Audrey take on the interlopers while yet being safe. He is a lover, not a fighter*, and of course he is an excellent supervisor. I decided to close the rarely used drapes, thinking that out of sight might be out of mind. This ploy eventually worked, and Audrey depuffed after stalking around the house and looking carefully out of all the windows and doors before going huffily off to take a nap.

*Having said that, I recently noticed that his left ear is slightly shredded. Audrey strikes again? I didn’t mind Roscoe’s torn ear – it seemed in keeping with his wildness – but I don’t love seeing the baby boy with a battle scarred ear. I hope he doesn’t secretly have a tattoo under his fur.

A YEAR AGO: A civilized break in the work week.

FIVE YEARS AGO: The glories of my favorite San Francisco museum.

TEN YEARS AGO: Hockey and Devo. It’s how I roll.