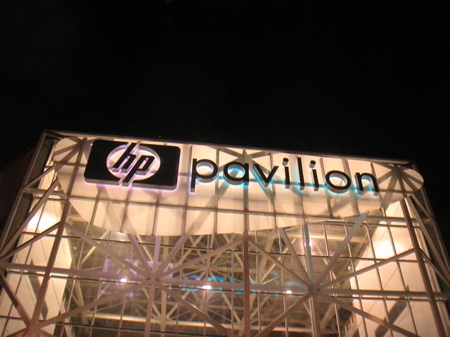 The land of the free and the home of the Sharks.

Besides the legendary Neal’s Yard cheese, I have recently indulged in some truly Velveeta (or possibly Cheez Whiz) moments.

Last Saturday, I headed down to San Jose to watch the Sharks in action. The Sharks lose no opportunity to joke about their name (or maybe they’re not joking). They skate onto the ice through a giant shark’s head. The head gets hoisted into the rafters, still in sight, because every time they score a goal, besides the traditional horn honking, dry ice floats out of the shark’s mouth in a huge mist, like in a horror movie (or a heavy metal ballad). Before they even come out, the scoreboard “fills” with water, using stunning graphics and convincing water sounds, before informing you that you’re in the Shark Tank. Get it? Also, every time the Sharks had an advantage, they’d play the Jaws music and their fans would make snapping motions with their arms.

Add in the quite scary nachos with actual Velveeta being consumed around you, throw in an $8 beer or two, and you have a truly cheesy experience.

And I can say that I do in fact know the way to San Jose. 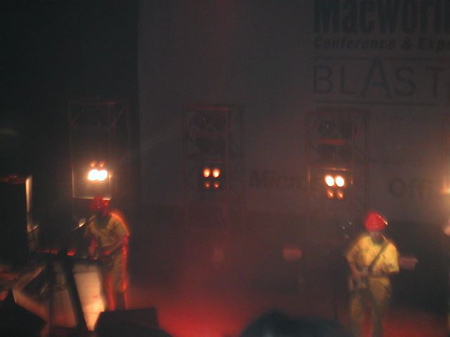 On Tuesday, I went to see Devo play at MacWorld Blast, which as far as I can tell is a big budget office party given by Microsoft. My friend R had obtained tickets through convoluted means. When I finally met up with him outside the historic Warfield Theater on one of the skankier stretches of Market Street, the line extended around the block, so of course I immediately wanted to leave, especially after I told R I was having a bad day and he actually asked me “What were your challenges today?”

Fortunately for him, at that point the line started moving and the rest of the night was too loud for conversation. I think I’m now officially old, because:

I couldn’t help noticing that most of the crowd was recording the concert on their cell phones, and at least a third of them were iPhones. All the little screens held up in the darkness reminded me of how people used to hold up lighters.

When I left the theater, a stripper handed me a card for the Crazy Horse and asked me if I wanted to go to a strip club. Because, really, who doesn’t after watching Devo? It’s only logical.