My friend the Moon has been showing off this week!

Yesterday, she was huge and golden, beaming down on the black trees and the quiet ocean. I could almost hear her laughing, and I gasped with shock and delight at my first sight of her as I drove down the Ridge in the early morning darkness.

Today, I got up at the peak of the eclipse, and watched for a while in the cold stillness, remembering that other lunar eclipse a few years ago when my much loved ex father-in-law left this earth and bade farewell with a shooting star. As I drove workwards, the Moon kept slipping out from the eclipse’s shadow, bathing the dark, calm ocean with a luminous path, growing larger every moment, surrounded by a dazzle of glittering stars.

Winter is beginning to give way to spring. It’s not here yet, but the vivid green grass at the side of the road is starred with daffodils and calla lilies unfurling their flags. And my camellias are blooming at last! Well, one bush is anyway: 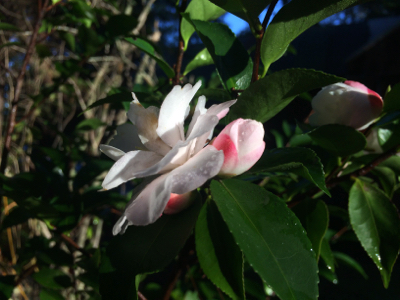 As for me, I once again made it through the hell of the annual fundraiser, somehow staying afloat on a sea of last minute tasks, stupidity, and minor and major emergencies. It was a battle at times, and a lengthy one, but I prevailed.

Megan worked at the Clinic on the first day of the fundraiser, which conveniently fell on the last day of the week, and offered to take me out for a drink if/when my work day ended. I went home, fed the kitties, put on some lights, and headed over to Megan’s place.

We reached our favorite watering hole just in time to catch a last glimpse of sunset: 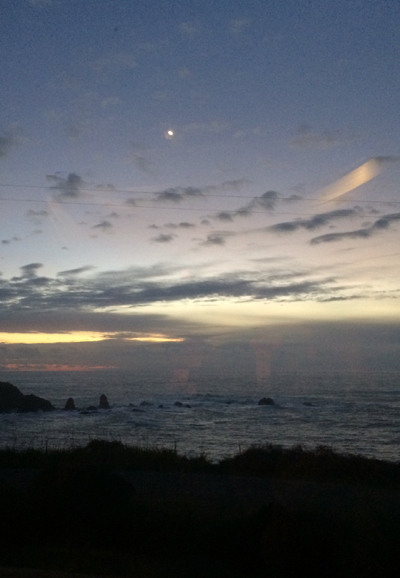 before pulling up stools at the bar and ordering a Lavender Lemon Drop: 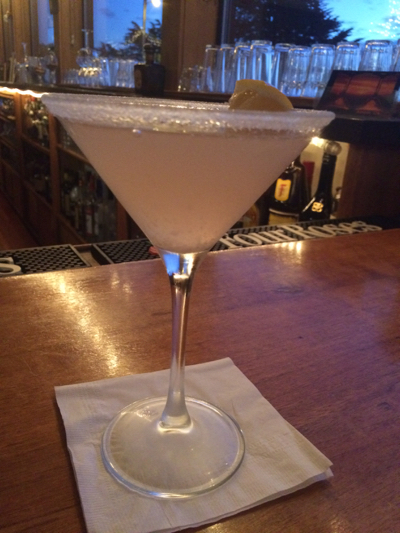 It was as delicious as it was beautiful, and it was medicinal as well, having a magically tonic effect on my previously bad attitude. I felt the civilization suffuse my being as I enjoyed chatting with my sister, the wonderful bartender, and some fellow locals as the sun slipped into the sea and the lights twinkled in the bar.

It was a two drink kind of night, and when the bartender gave us the bill, she said that the first round was on her. We of course protested, but she insisted, and I have to say that it was a first for me, having a bartender buy me a drink. It’s a lovely experience, too. The perfect end to a crazy week!

A YEAR AGO: You guessed it: the horror of the annual fundraiser. Is anything annual ever fun?

FIVE YEARS AGO: Nothing like a game of heirloom lost and found, I always say.