It was a beautiful day to go to the bookstore, which is located right across from the street from the ocean. It has its own webcam, in case you want to see what I’m seeing.

The bookstore was celebrating Independent Bookstore Day, so we were greeted by people making stencils and selling cupcakes outside. Inside, a staff person handed us a scavenger hunt list: 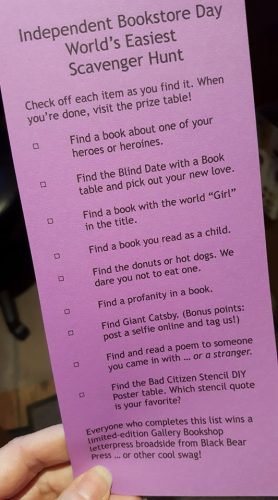 and we were off!

The first and most important thing was to get the new Neil Gaiman book about Norse Mythology with the special, limited edition Bookstore Day cover for Jessica. Jessica wrote a fan letter to Neil Gaiman when she was five years old, and he sent her a handwritten letter in response, and Erica and Jessica basically ARE Norse myths. Erica recently did genetic testing and it turns out that she and Jessica are essentially Laplanders, Sami people, with a dash of other Scandinavian thrown in. So that book was the perfect gift for the kidlet.

Megan and I had a lot of fun with the scavenger hunt. Megan thought it would be fun if we chose a book blind date for each other: 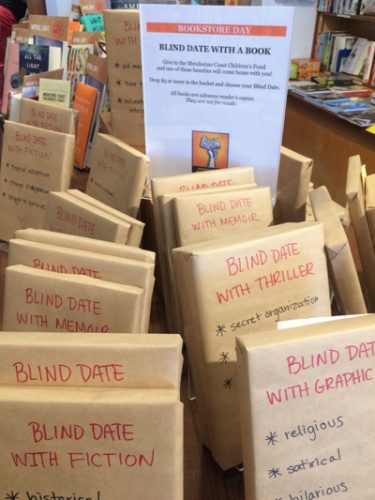 The proceeds go to the local children’s fund, so it’s a win for everyone.

The prevalence of selfies had led me to believe it was an easy thing to do. It would also give me the unprecedented ability to take a photo of myself with the Great Catsby, who is usually looking down on his adoring public, both literally and figuratively.

While it was easy to find the giant Catsby: 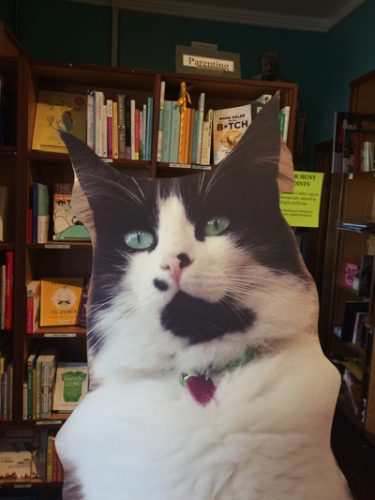 it was less so to take the selfie, making me wonder about the popularity of these. Does everyone else have arms that are five feet long? Or is it just my usual lack of techspertise? Either way, I gave up on it after several attempts to get both Self and Catsby in the same photo. Megan offered to take it for me, but I thought that was cheating, since it was supposed to be a selfie.

We had the hardest time finding poems to read to each other and a book about our hero(ine). I finally tracked down a little volume of Zen poetry, and it was surprisingly nice to read poems to each other in a sunny bookstore. I thought I would feel like an idiot, but I actually enjoyed the words. As for heroes, we decided on a book about Winston Churchill. You may remember he has been my hero before, and of course our father pretty much worshipped him, as I imagine most boys growing up in WWII London did. I think this may still be my favorite Churchill anecdote.

We dropped off our completed scavenger lists and selected packets of mini crayons as our prize. Megan took them to work with her, since crayons have a way of disappearing from the Emergency Room waiting room. Yet another mystery. And yet another delightful outing with my sister.

A YEAR AGO: The Mystery Cat.

FIVE YEARS AGO: A busy and happy weekend.