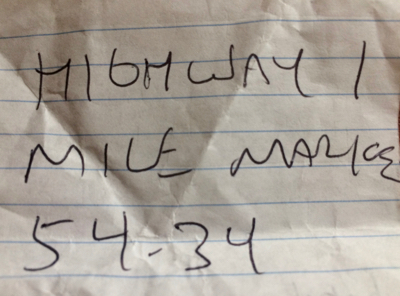 It really does exist

I started the week with a bang – or at least, a flat and smoking tire.

As I left the Big Town, I noticed that Wednesday was not handling the way I was used to. I thought maybe it was the wind, but as time progressed, it became clear that it was more than that.

The “low tire pressure” light came on, but being the genius that I am, I did not make the connection between that and the increasingly rough ride, despite my brother’s exasperated observation of “Suz, those lights on your dashboard aren’t just there to be pretty.” In my defense, though, that light has been known to come on when only the minorest of tweaks was actually necessary. It’s the little light that cried wolf. Unfortunately, this time it wasn’t kidding, and was, in fact, a little too understated.

I finally realized that I had to pull over, and did so just south of Road 409 near the next town. A sheriff’s car with lights blazing pulled up right behind me. Does this count as being pulled over? If so, it’s the first time in my life. I also noticed that my back tire was smoking, and not in a good way.

Getting out of the car, even I could see that my low profile tire was so low that it was, in fact, flat. Also unfixable. Being a faux adult, I didn’t know what to do, so the sheriff said to call the emergency number on the back of my insurance card, which I did. The person answering the phone either could not or would not understand that there was no cross street. He could not locate Road 409 or its alter ego Point Cabrillo Drive, and disclaimed all knowledge of mile markers. He was probably in Kansas or something.

The sheriff took the phone from me and assured the Kansas guy that the tow truck driver would know where mile marker 53.34 was. Mr. Kansas texted me the name, phone number and ETA of the tow truck, which was an entire discouraging hour away.

The sheriff saw me back to my car, told me to put on the hazards, and went on his way. I felt so lucky that he was right there when I needed him. I felt less lucky that I had, possibly for the first time in my life, forgotten to bring a book with me.

It was nerve-wracking feeling my car, otherwise immobile, rocking as cars fully equipped with four working tires swept past me. Not everyone passed by, however. Two friends stopped to check on me, as did a total stranger and the UPS guy from the jobette. It warmed my marooned heart to know that even strangers in our little corner of the world care enough to try and help someone with car trouble.

Eventually, the tow truck appeared. It was manned by an outsized guy who looked like he had recently escaped from ZZ Top without having time to shower or brush his quite remarkable beard. Star would not have enjoyed his look. He told me that the job right before mine was on the mythical Point Cabrillo Drive, so all the time I was waiting for him, he was practically there. Much like the time I required roadside assistance in Florida, after a lengthy wait it took ZZ Top about 30 seconds to change out the utterly destroyed tire for the spare one.

He warned me seriously that I could not drive above 50 miles an hour and that I could not drive far on it, though he added darkly that there were idiots who did and paid the price for their folly. I observed that my fellow drivers would object to such a majestic pace on the highway, and he thrust the middle finger of his meaty paw toward the road and exclaimed, “Fuck ‘em! It’s your life!” He then gave me a shoulder hug, saw me back to my car, and said he would watch my back and tell me when it was safe to pull out, which he did.

As I made my leisurely way home, I was thankful for ZZ Top and his rough concern, the kindness of the sheriff, and the caring of friends and strangers. Also for the 30 year old beater car which got me to work today with its assorted collection of rattles and hums, all in one piece.

A YEAR AGO: A wonderful weekend.

FIVE YEARS AGO: A trip to the DMV. Not as bad as you’d think.

2 comments on “Flat Out”