It’s been a banner year for real estate among my circle of friends.

My friend Richard and his wife bought the house they rented for several years. The owner passed away and his or her heirs did not want the house, so they sold it to the existing tenants, making everyone happy.

Jonathan’s girlfriend Rio, an only child, inherited her mother’s house in Santa Barbara when she passed away. It is the only house overlooking the Santa Barbara Bowl, and I am sure that even the simplest shack in Santa Barbara is worth a pile of cash. Rio did well on the sale, and wanted to put the proceeds back into real estate rather than in the notoriously volatile stock market (especially in an election year).

She looked around for a while, a little daunted by the offerings on the market (infested with rats! Needs thousands of dollars of work!) before lucking into a place that hadn’t gone on the market yet.

It’s in the next town north of Hooterville, and boasts a main house, a cottage, a studio/garage combo, a greenhouse, and a potting shed, all on more than an acre. Here’s the main house: 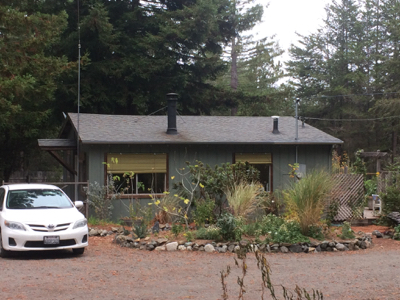 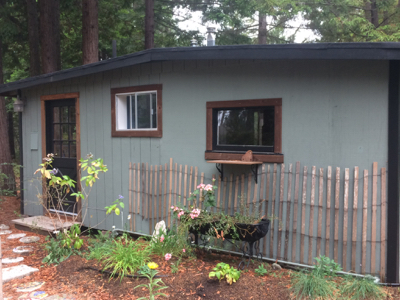 The cottage and studio/garage still need fixing up, but the greenhouse is full of plants, including a giant one that reminds me of Little Shop of Horrors. Amazingly, the former owner had just fixed up the main house when she fell madly in love and decamped to San Miguel de Allende, selling her property and leaving everything behind. Quite the story! The plan is that Rio will live in the house while she fixes up the other one(s). Eventually, she will rent one or more of them out while still keeping a room (or cottage) of her own.

At the opposite end of the scale is my dear friend A’s struggles to buy an apartment in London. Her landlord raised the rent an unaffordable amount, so she set about looking to buy a place, aided by a down payment from her mother, who is secretly a stock picking genius. She was also aided by a drop in London property values following BREXIT, so it seems the timing was right.

Unlike the US, where you find out how much a bank will lend you for a mortgage and then find a place it will buy, the UK system is convoluted and frustrating. I don’t understand all the plot convolutions, but lawyers are involved, and an ensemble cast of surveyors and inspectors. Also people can swoop ahead of you in line, and the apartment can suddenly be taken off the market with no notice after an offer has been accepted. You decide what you want to buy, and then try to persuade banks to lend on it. Oh, and if you happen to be over 50, it is much, much harder to get a mortgage and the term is dramatically shorter.

It’s been a wild rollercoaster ride for A and her husband, and I wouldn’t be surprised if, like a real rollercoaster, there was some screaming. However, they finally found an apartment which they liked, could afford, and wasn’t secretly falling apart, and it looks like they may have a new home soon. I am so happy for my friends and their new homes!

A YEAR AGO: More house news with Lichen’s new kitchen!