Megan and I hopped in her little red car and headed over to Lichen’s place on the magical South Coast.

It was a postcard day, without a cloud in the sky, the ocean impossibly blue with waves crashing against the wild, rocky coastline with its dark, windswept trees. After a short and pretty drive, we arrived at Camp Lichen, where Marley was joined by a pretty, stripy cat named Mouser: 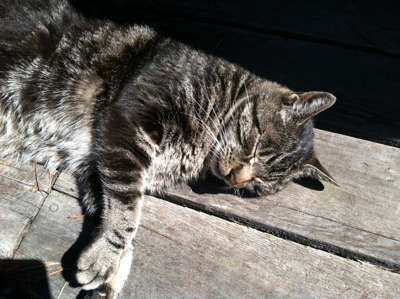 who is visiting indefinitely while his owner is off doing other things, much like the Lovely Rita and me so many years ago.

When Lichen isn’t creating beautiful landscapes at other people’s houses (and his own) or training wayward pets or cutting people’s hair (the ostensible reason for the visit was a haircut for Megan), he is making leaves out of cement: 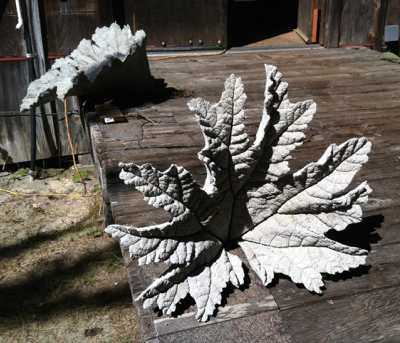 Sometimes they’re painted and sometime they’re not, but either way, they make amazing art, whether in the garden or inside the house. He is so talented.

Megan perched on a wooden stool on the deck overlooking the garden and the ocean: 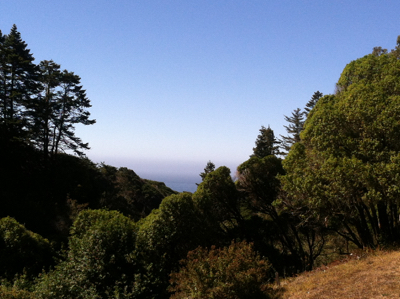 while Lichen cut her hair. Megan inherited Mom’s glossy, thick, wavy hair, and Lichen actually has to thin it out. Mom never lost her hair, even with years of chemo and radiation. She just got regular density hair, and it never really went grey, either.

After the haircut, we finally got a look at the kitchen: 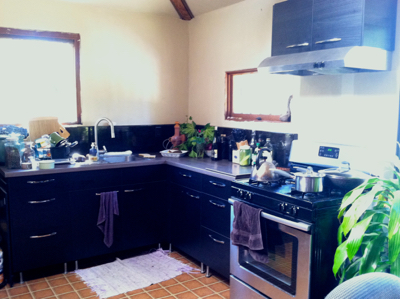 You may remember that when Lichen moved in last winter, there was no kitchen and his landlords kindly allowed him to design one from Ikea and had it installed. I was worried that it would look too dark, but it looks great, though my photo is a little glare-y due to the sun being so sunny that day. You know how it is.

Before we left, Lichen loaded us up with pumpkins. If the Great Pumpkin really is looking for the most sincere pumpkin patch, I know where he’ll be on Halloween: 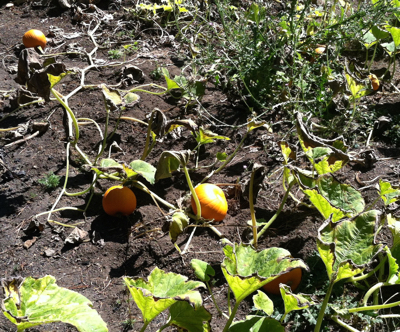 We set off homewards with hugs and waves. We are so lucky to have such great friends.

A YEAR AGO: Another visit to the South Coast. Must be the time of the season.

One thought on “Haircuts and Kitchens”