A look at a summer trip to Paris.

Sitting in the open window of my room at the Hôtel des Batignolles, in a part of Paris which is new to me. The room is quite nice for 290 francs a night: a double bed, clean bathroom with pretty grey tiles, and a window looking over a courtyard where children play and neighbors chat. It is not at all touristy.

The hotel is close to Montmartre, and has a post office, corner store, and many cafés all nearby. At the end of the street is a lovely, quiet square. The hotel was recommended by Margaret’s hairdresser, Philip*, and I have been very well taken care of so far.

After checking in, I walked to the rue de Rome, full of music stores, to the Gare St-Lazare. I bought a return ticket to Vernon, to go to Giverny tomorrow. Then I walked down to the Champs Elysées and had an omelette and a glass of wine while watching the people go by. It is magical to be in Paris again.

Slept well on my down pillows. Walked to the train station through the quiet streets (it was early, Saturday, and August, the traditional month for holidays). There are no direct trains to Vernon on Saturdays or Sundays, so I took an almost empty train to Mantes-La-Jolie and then changed to a train to Vernon. You can take a bus from Vernon station to Monet’s house, but of course I took a taxi**. The taxi driver was very kind and arranged to pick me up a few hours later to take me back to the station. He pointed out a few things en route – a 400 year old mill, barges on the Seine – and said that Monsieur Monet had been beloved in the village. His coffin was driven to his grave on a humble wooden cart, “like one of us”, the driver told me.

I was surprised by how uncrowded the museum was. Entrance to the house and gardens was 30 francs (about $5). I was enchanted by the beauty of the gardens. They are separated by pink gravel paths and often have vine-covered archways, but the general effect is wild and uncultivated. A slim black cat lounged Cleopatra-like on a stone bench, disdaining the passers-by. The garden was a riot of color, filled with roses, geraniums, hydrangeas, black-eyed Susans, sunflowers, and countless others. The waterlily pond looks exactly as it was painted, and it was amazing to stand on that bridge and look at those flowers: 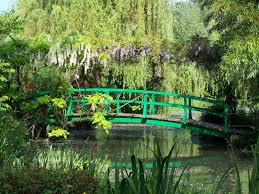 After touring the gardens, I had to find a quiet spot to soak it all in and think.

The house was truly charming. All the Monet paintings in the house are reproductions, and most of the pretty pink stucco house with green shutters is decorated with Japanese prints and drawings. I was especially taken with the cozy yellow dining room and the blue tiled kitchen. The house is very unpretentious and livable. By the time I left, the place was packed and there was a long line to get in. I had timed my pilgrimage well.

When I arrived back in Paris, I visited the Square des Batignolles: 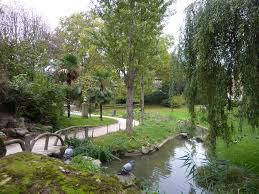 It is delightful, with waterfalls, duck ponds, and a carousel. I am enjoying my temporary neighborhood. I felt quite at home reading the newspaper on a green park bench in the early summer evening. Once again, I marvel at the many people who say Parisians are rude or unkind. Everyone has been quite the opposite to me, from the elderly lady who was amused that we were reading the same newspaper to the man who invited me to admire his little dog. No-one has refused to help me when I asked for directions or information (such as where to buy stamps on a Saturday) and some people (such as the man on the train from Mantes to St-Lazare) are even too friendly. I think it’s all in your own attitude.

*Philip was fantastic. He used to come to Margaret’s house and do her hair every week. He was very flamboyant and very funny, and I always loved talking to him.

A YEAR AGO: A loving farewell to a very special man.