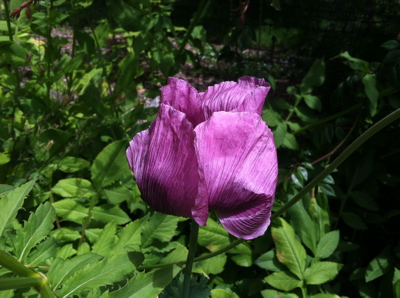 On summer solstice Sunday, Megan and I headed to the Big Town to say farewell to my late friend Joel. Not far from the same place traffic ground to a halt this winter, Megan and I actually witnessed an accident as it occurred.

A guy in a white truck came around the corner, hit a telephone pole, snapping it off, and then hit a power pole, where the truck (a) came to a halt; (2) had its hood peeled open like a sardine can, right in front of our eyes. Megan pulled into a driveway across the highway from the accident and grabbed her EMT kit from the trunk. She went over to check on the passengers as gas poured from the totaled truck.

I stayed where I was, since I knew from my siblings’ years of EMS that unnecessary observers are not welcome on scene, and there was nothing I could do to help. Megan later told me that the passengers were fine, not intoxicated, and that something just failed in the truck, making the driver lose control as he came around one of the many curves.

Everyone was fine, and someone had called 911 and started controlling traffic by the time we got back on the road, passing the ambulance, sheriff, and highway patrol cars racing to the scene. On our way home, they were still on scene.

Arriving at Joel’s service, however, everything was serene. The Botanical Gardens donated the use of one of the gardens in honor of his status as a Master Gardener. It was a beautiful day, and friends and family gathered among the blooms and fruit trees to remember Joel: his humor, his gift for writing, his compassion and activism in working with homeless youth, the great love he and his husband Jim shared, and how their marriage just made their love stronger and deeper. Jim now wears both wedding rings and feels that Joel is still with him. There were tears, but there was also love and laughter, and that’s the way Joel would have wanted it.