Megan and I went on a little adventure to the south coast on Sunday. We could not have had a nicer day for it. The sky was a clear, cloudless blue, and it must have been at least 70 degrees. No jacket required.

It was an all girl road trip, with Star and Stella in the back seat and Megan and me in the front. Megan drove, so I could enjoy the scenery, which was spectacular. The ocean was showing off, as were the whales and dolphins frolicking in it. Calla lilies unfurled their white flags by the side of the road, and drifts of yellow daffodils nodded in fields. The road meanders through hills, some steep and some rolling, dotted with cows and sheep on one side, and a precipitous cliff overlooking the ocean on the other, fringed with dark trees twisted by years of wind.

Our first stop – first things first, you know! – was the fabulous Thai restaurant in the tiny town of Anchor Bay: 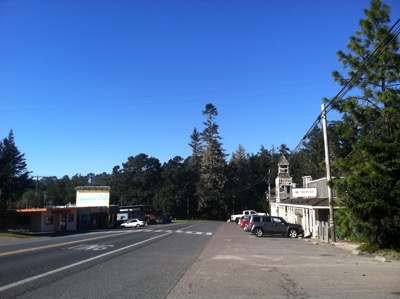 We ordered take-out for dinner, and while it was being prepared, wandered with the dogs through a small, secluded ocean view cemetery: 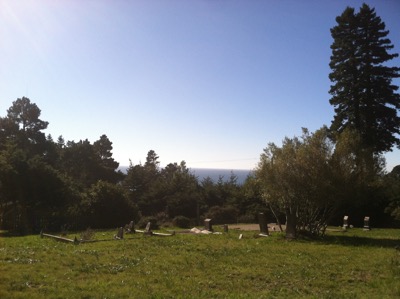 The ground was starred with wild irises: 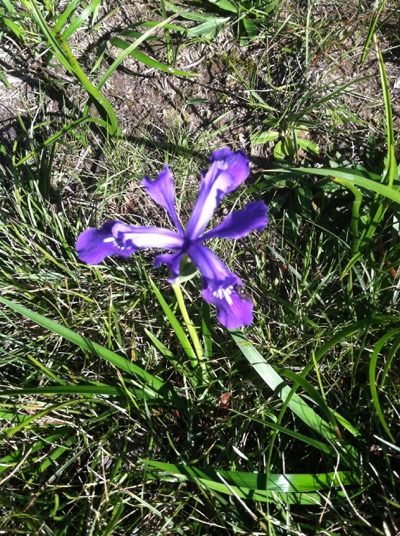 and gravestones ranging from the ancient: 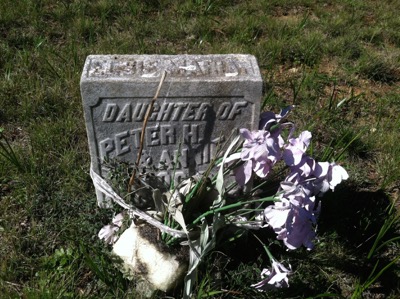 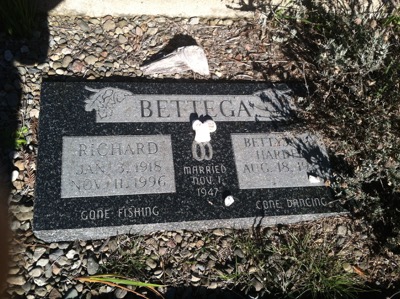 I loved how this couple had their wedding date and rings engraved between their names, and that his side reads “Gone fishing” while hers reads “Gone dancing”. Somehow I feel that their love lives on.

We stowed the dogs and the Thai food in the car and set off for the quirky little city of Point Arena. We went to the pier and found a rough wooden table on the deck of the chowder house. As we waited for lunch to arrive, we admired the view: 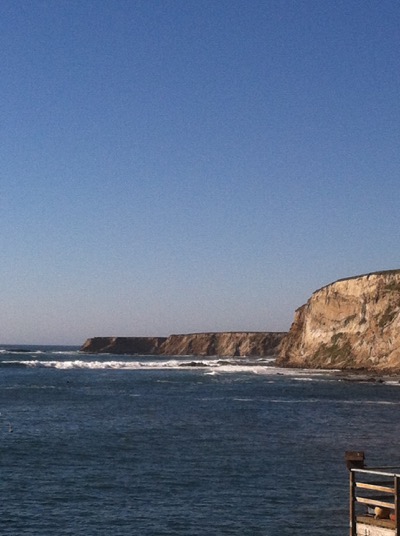 and the intrepid surfers. As Megan said, they must be experts to risk the rocks as well as the waves. While surfer watching, we moved away from the table, and a giant seagull made his move on our unprotected lunches. He only managed to knock over my nearly empty lemonade glass, which must have been a huge disappointment to him.

After lunch, we took the dogs to the Stornetta Public Lands, which recently became the newest part of the California Coastal National Monument, thanks in part to efforts at the jobette, along with many others. You may recall that my boss actually met the President when the lands were signed into protected status, something that still totally thrills me.

The dogs, however, were more thrilled by the sights, sounds, and smells of this new playground, especially cow fan Star. It soon became apparent that the lands are still in use by the Stornetta family for grazing their justly famous dairy cows*, so we divided our time between admiring the scenery: 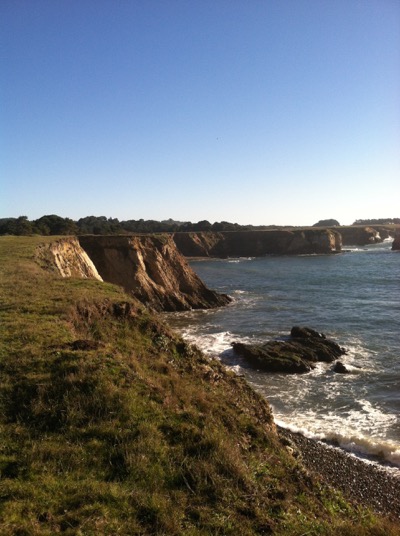 and keeping an eye out for cow calling cards, as well as keeping Star from rolling in them. I also began to worry about getting a sunburn. In January.

Somehow, the day was almost over, and as we headed back to the car, I stopped to watch the waves crashing against the rocky cliffs in the last, golden light of day, thinking of how lucky I am to live in such a beautiful place with such a wonderful family, including Star and Stella.

*The brand name is Clover Stornetta, and I have to admit that their billboards always make me laugh.

A YEAR AGO: Driving, and lots of it – also to the beautiful south coast.