Clyde is back to his old self again. I’m still in the phase of being delighted by his naughtiness rather than annoyed by it. Oh, look! He’s on the counter! Yay, he’s clawing the couch! It’s so cute that he’s milling around under my feet and meowing while I’m trying to feed him!

I will never know if it was the potassium infusion the vet gave him, or whether he just needed an extra day or two to recover from whatever it was. I will also never know what it was. A bug? Virus? A bad bird or mouse? At least I do know that he is 100% OK according to the tests. And I’m so thankful to see that he’s alert and happy again. My little guy.

Megan is also doing fine. She shook off the flu quickly enough to do four 12 hour night shifts this past week. She woke up on Friday afternoon and we met Monica for drinks that evening (more about this later). On Saturday, she went to swimming lessons in town, then went to Safeway and shopped for Erica, and then brought the shopping to Erica’s house, about an hour and a half’s drive one way.

I couldn’t go, but I sent along some movies for Jessica and also The Munsters, which she loves. Jessica will be in a cast for twelve weeks. Goodbye, summer! We will have to figure out some way to get her around the county fair in the middle of September. I also have to figure out a way to go and visit those girls soon. Erica reminded me that they have been back from Portland for an entire year now and I have yet to go and visit them. Worst. Friend. Ever.

Speaking of which: I ended up giving back the fancier camera. It wasn’t notably better than my old one, so it didn’t make sense to me to keep it. Fortunately no-one was offended. I’m just glad they can get their money back and that their feelings aren’t hurt.

On Friday evening, Megan and I met Monica at the bar of what is rapidly becoming our regular watering hole, the Little River Inn. Here’s the view from our table by the door: 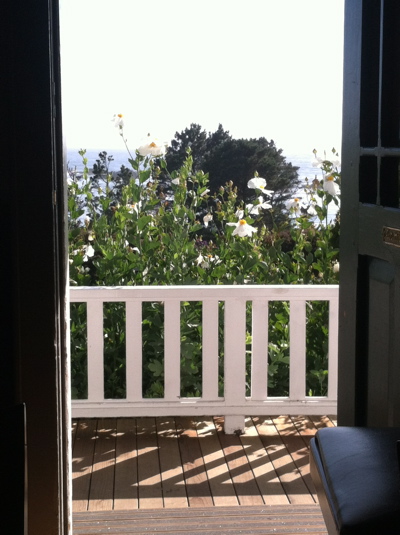 My co-worker turned up with her beautiful family, including her mother’s friend who is an attorney in Nevada. We spoke about the Zimmerman case, and he said that juries can be very unpredictable, and he thought that they might acquit despite the evidence. Unfortunately, he was correct. I was as appalled by this verdict as I was in the trial of Oscar Grant’s killer several years ago. Coincidentally, the movie Fruitvale (named after my former BART stop in Oakland, where the murder took place) was released that very day. I am saddened by the racism and injustice in this country.

2 comments on “Here and There”