Independence Day evening finally freed us from the death grip of the blasting (and blasted) heat. The weather has been so strange this year. The driest January and February in recorded history, the strange rain storm in June, followed by the heat tsunami, which concluded with thunder and lightning but no rain. We were all terrified of a repeat of the ’08 wildfires which my brother and his brotherhood fought so valiantly for so long. He told me later that he was half awake all night, listening for the pager, and that in his mind he was already halfway out the door. Fortunately, there was only one small fire inland which was easily contained and that was all.

Independence Day evening also freed Megan of the delightful BBQ we had had at our brother’s place. She was violently sick all night, with her body and bones aching, so it was a flu or virus which a visitor to the ER thoughtfully gave her as a parting gift. Due to the holiday, she didn’t know the locum doctor on staff at the ER, and the staff at the clinic, where my sister is regularly seen, refused to call in a prescription for an anti-emetic. I went to the village and asked the pharmacist if he could recommend anything to help her, but he said there really isn’t any over the counter medication for this. He was visibly shocked that the clinic wouldn’t call in a prescription for a regular patient for something that has no recreational use. I have a feeling that the clinic staff has not heard the last of this.

I stocked up on ginger ale, Jell-O, chicken soup, and other queasiness supplies and dropped them off at Megan’s house. She had lost the juice and water she drank that morning, and couldn’t even think about coffee, even though she is composed of at least 75% caffeine at all times.

I am pleased to report that she is feeling better today, though I wish she didn’t have four 12 hour night shifts waiting for her, starting tomorrow night. That’s pretty tough, even for her.

In other medical news, our beloved Jessica broke her lovely leg a couple of days ago. I don’t have all the details, but apparently she was trying to get out of another kid’s way on the trampoline when he or she fell on Jessica and broke her leg in two places: 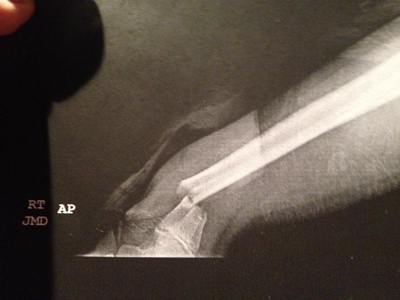 Fortunately, she didn’t need pins, just a cast, and she is back home, resting as comfortably as possible in the circumstances. Erica said the doctors were concerned about Jessica’s striking pallor until she assured them it was Jessica’s normal skin tone. 🙂

Seems like my little Clyde is under the weather as well. He looked bleary last night, and this morning, he didn’t run outside as usual. He did eat, but then he just huddled by the (open) door like an uncomfortable loaf of bread. I couldn’t see any wounds, and he didn’t cry out when I picked him up and felt him all over, but he didn’t purr and he just looked blah.

I notified Megan before I left for the jobette, and told her I was keeping him inside (which means Audrey and Roscoe will have to be outside all day), and she said she’d stop by to check on him. Dr. Megan is never too sick to pay a house call. Hopefully he will be feeling better by the time I get home. I hope everyone is!

2 comments on “(Under the) Weather”