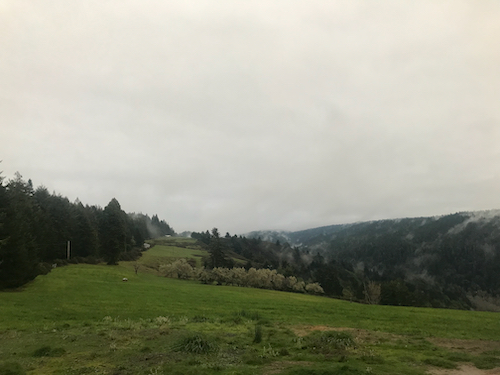 Solstice on the Ridge

I took the photo above on my way home on the winter solstice. It was the shortest day of the year, but it was also beautiful.

It’s nice to think that we are moving back into the light, even though I know perfectly well that as soon as I get a glimmer of light in the mornings, it will be cruelly snatched away from me by the Powers That Be, condemning me to weeks more of completely unnecessary darkness, driving in Danger of Deer.

But I won’t think about that now. I won’t even think about it tomorrow, no matter what Scarlett O’Hara says. I’ll think about it in a couple of months. In the meantime, I’ll be thankful to be alive and breathing after the earthquake we had on Solstice Eve.

Megan and my work friend Michelle happened to be in my office around noon that day when I got an alert on my phone saying, “Earthquake activity has been detected in your area”. I had barely finished reading it before I heard the rumble and felt the strong roll beneath me. The clinic ceiling creaked, and the rocking and rolling seemed to go on for a long time.

I usually sleep through earthquakes or fail to notice them, but this one was impossible for even the most oblivious (Me!) to ignore, registering an extremely healthy 6.2 on the Richter scale, and located about 45 miles off the coast of Eureka in Humboldt, our neighboring county. It was unnerving. It was the strongest one I had felt in years. Maybe Santa was feeling a little Grinchy this year and sent us a Christmas earthquake?

A YEAR AGO: My boys.

FIVE YEARS AGO: Things were sparkly.

FIFTEEN YEARS AGO: Enough with the crazies already!

TWENTY YEARS AGO: All the kitty news that’s fit to print.