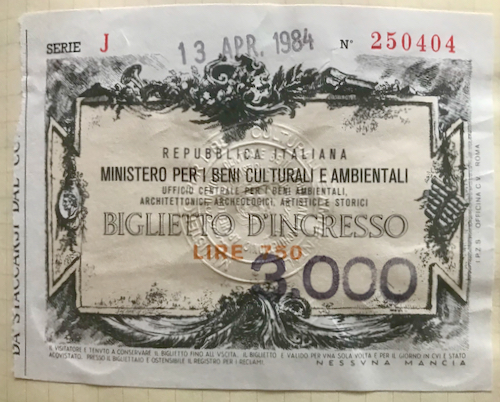 In 1984, my father was invited to work for a few months at the University of Siena. He brought my mother and sister (who was 13 at the time) with him. I convinced him to take me along (I was 22), due to heartbreak and drama in my life. It was a good decision, not only because the outrageous admiration I received from Italian men was extremely therapeutic, but because living in Italy, even temporarily, was an amazing experience.

Two trips to Florence and one to Pisa. 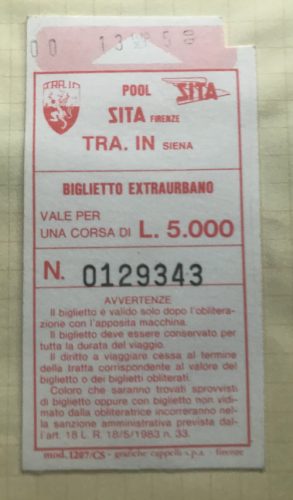 We visited the Uffizi gallery and the Raphael exhibit at the Pitti Palace. The rest of the palazzo was shut off because of the exhibit, but the rooms which housed the exhibit were as remarkable as the exhibit itself. I especially liked the first room where the actual paintings were set up, it was like Wedgwood, very textured, white and palest pink. There were no more than 20 paintings, but they were all very beautiful. In the following rooms, there were x-rays and ultra violet photographs of the paintings, examining the paints used, and drawings with the final paintings beside them.

The courtyard of the Uffizi was covered in graffiti, almost shockingly so. Inside the gallery, there was almost too much to take in, but the unforgettables for me were the unbelievable Botticelli “Spring” and “Birth of Venus”, which were breathtaking and almost made me weep for their beauty. The wonderful 5th century BC [actually 1st century] Venus in the Tribuna looked so alive and so beautiful you could fall in love with her. There were two portraits in the Tribuna of women who glowed out of their frames. There were also two wonderful self portraits by Rembrandt, painted 30 years apart. In the older portrait, he looked very dissipated indeed! He must have had a lot of fun in those 30 years.

Florence is a small (600,000 people) city and all the historical buildings and art galleries are quite close together, so just walking around is an experience and gives you a feel for the city and the people. We also explored the market in the Piazza San Marco, which was a great deal of fun and full of lovely things – lace, shoes, scarves, jewelry, gloves, all jumbled together.

It was a long drive to Pisa, but it was a radiant day, and since it was mostly new places en route, I wasn’t bored. When you leave a town in Italy, they have its name on a sign crossed out! We drove through the Chianti wine country, through groves of trees and up and down hills. You seem to climb imperceptibly in Tuscany and then you look down on a splendid view of the country beneath, farms, vineyards, houses. I still cannot get over the way everyone lives in medieval structures. Sometimes, you see an ancient, crumbling building that no one could possibly live in, but then you see the inevitable line of laundry hanging from the window.

Some delightful details en route: two carved wooden dragons over a doorway, a forsythia tree at the base of a palm tree. One English word the Italians seem to have taken to is “jolly”. There are Jolly hotels, cafes, restaurants, even garages!

In Pisa, the only thing to see is the tower, which was much smaller and prettier than I imagined.60% of Pisa was destroyed during WWII, so most of the town is new and not very interesting. The tower is white and grey, and Dad, Meg, and I climbed it – Meg even went up the part you needed a ladder to reach. You get a token and go through a turnstile like the subway.

After that, we drove to the sea. It was the first time Mom had seen the Mediterranean [I spent the summer of 1979 on the French Riviera, where I was shocked by the warmth of the Mediterranean’s waters. Among other things.]! Meg found some beach glass and a little tile worn to a perfect triangle. The sea was as blue as it is in France. It is very beautiful, exciting, yet hypnotic. We drove home past Volterra, a village famous for alabaster and Etruscan ruin