I gave myself a lovely gift for my birthday: a couple of days off. Really two and half, since I left early on my birthday eve to spend some time with Angelika.

It was a flawless late spring day, the kind of day when even someone as grumpy and jaded as Audrey* feels glad to be alive. The sky was the deep blue that you only see in California, the ocean looked tropical, and the sides of the road were alive with multicolored wildflowers and fluttering butterflies. It was a beautiful drive to Angelika’s place. The sign outside her little salon sums up Angelika’s philosophy: 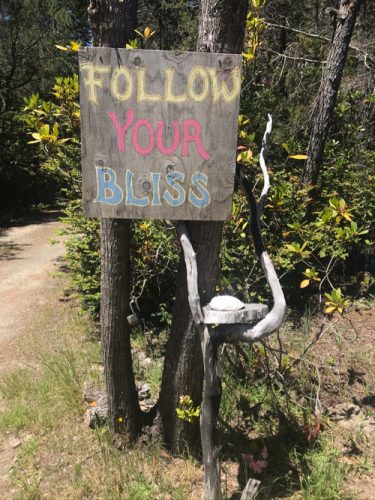 It was blissful indeed to sit in her chair and catch up on each other’s news. I didn’t have enough cut off when I had the color done in March, so I decided to cut three inches off. Daring! It is still about an inch below my collarbone, but it feels much thicker and healthier. Angelika cut some long layers into my hair for movement. Megan got the good Mom hair** and I got the less glorious Dad hair.

While Angelika worked, she had the door to her salon open. It’s a converted pump house, just the right size for one sink and one chair and two friends. Through the door, we could see birds taking baths and getting refreshing sips of water in the fountain: 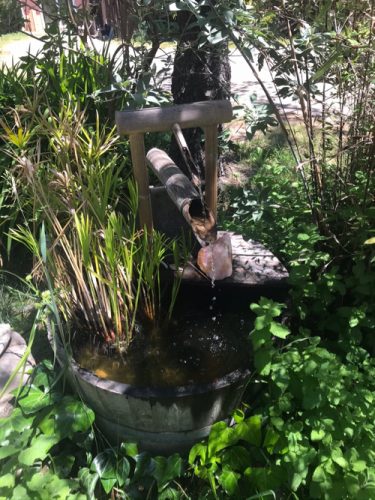 When I left, Angelika gave me a beautiful card, a succulent in a pretty pot, and a tube of conditioner to keep my hair pretty. She is such a wonderful friend!

There is no cell reception at Angelika’s house, so when I got to where there was reception, I pulled over to check my texts. I was expecting some time sensitive info about a work thing (which I got and took care of), but also had a text from Megan saying that Rob’s car had broken down at one of the hardware and lumber stores in town.
I suggested that I pick him up, and she was thrilled, since it was the only day that week she didn’t have to go town herself. I was really happy to finally do something for them; they do so much for me.

Arriving at the store, I failed to find Rob. I texted and called him with no result. I texted Megan and she suggested he might be at the car parts store. I headed there, but partway there, Megan texted me to say he was in the lumber part of the first store. I started back to Point A, but had reckoned without the weekly farmers’ market, blocking off the street I needed. Fortunately, I know secret alleys and byways, so I took that way, noting this unexpected piece of art along the way: 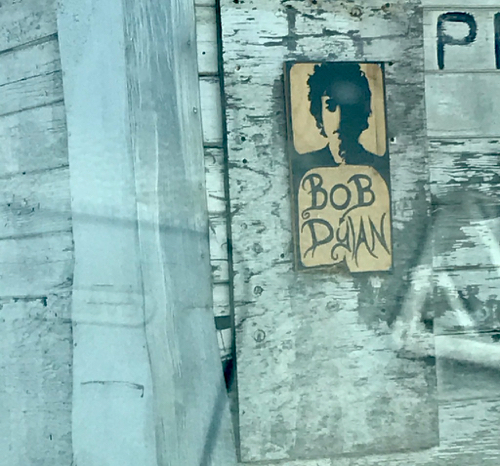 This time, I was successful in finding Rob. He showed me the defective part, which looked like some kind of hose contraption to my untutored eye. He had arranged with the store to leave his car there overnight. We went to order a new part, and it was set to arrive by 8:00 the following morning. We had a nice drive home together. I was so glad I could help him out. It was a great beginning to my birthday celebrations.

*My friend Patrisha is Staff to Audrey’s mother, Quince, and describes her in her rich Scots accent as “a huffy miss”. Though mother and daughter may be far apart in miles, they are close in age and temperament.
**Despite her many cancer treatments, Mom never lost all her hair. She just got regular person hair. When she died of breast cancer at the age of 73, she still had very little grey in her hair.

A YEAR AGO: I got internet for my birthday! The best birthday present ever!

FIVE YEARS AGO: A bad birthday.

TEN YEARS AGO: A really bad birthday, losing my beautiful cat June on my birthday night. I still miss her. She was so beautiful.