The week leading up to Thanksgiving was a stormy one. The Ridge was covered with redwood needles, fallen twigs, branches, and general debris. One night driving home from work, it was so foggy and stormy that I could barely see the road. In fact, I couldn’t see the turn off from the highway to the Ridge, so I guessed. I was close: I ended up in the pullout at the foot of the Ridge. I drove down the middle of the road at 20 miles an hour, hoping for the best. I wanted to drive faster and get the hell off the road, but the visibility made even 20 about as fast as I could safely go. I was so glad to get home!

We were hoping that Clayton could join us from the City, but the weather was too bad for that four hour drive, especially on a motorcycle.

We celebrated Thanksgiving on Saturday, so I had some extra time to get things ready. Over the years, I have learned that the key to surviving the holidays is to do as much in advance as possible. So I made the cranberry sauce, dressing and roasted pears for the salad, cut up the bread to get stale for dressing/stuffing, and roasted and peeled the chestnuts: 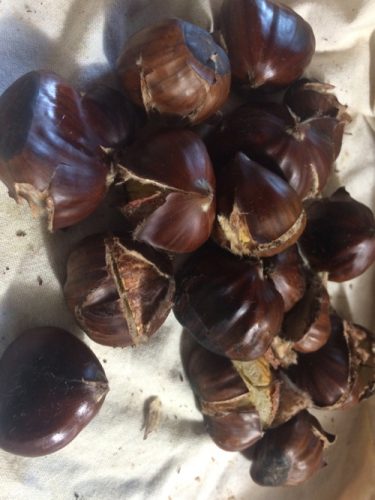 Like every year, I forgot how horrible it is to peel chestnuts until I was actually doing it, even though I let them steam in a tea towel for fifteen minutes after roasting, which is supposed to make it easier.

Oddly, I never seem to have trouble peeling chestnuts I buy from street vendors in Paris, served in a paper cone. Maybe it’s being in Paris.

The house was pretty clean, so I didn’t worry about that, either. I did trap the boys in the bachelor pad (Megan’s old dog crate, fitted out with a comfy quilt) and close the bedroom doors to keep Audrey in. Audrey disdains company, but I didn’t want to take any chances on an escape attempt happening while people were going in and out.

On the day itself, I was putting the turkey breasts into the oven and thinking how lucky I was that my guests were almost entirely very capable cooks, ready to spring into action if something went wrong in the kitchen. Jonathan made the gravy while Rob mashed the potatoes. Everything was ready: 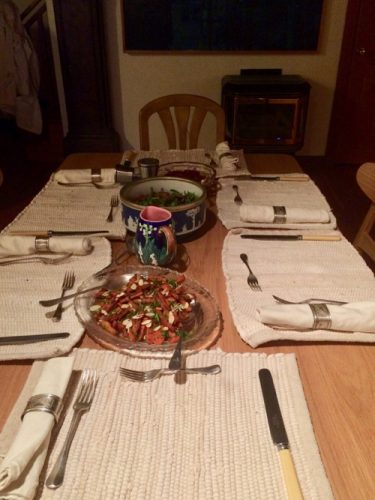 when the power went out. Sighing, I headed to the closet to get the power outage box with its lanterns and headlights. Bu the time I had it all set up, the power was back on again. We kept the lanterns out just in case, but I’m pleased to say we didn’t need them.

Dinner was fabulous. I was too busy eating and talking to take many photos. We had last year’s cider: 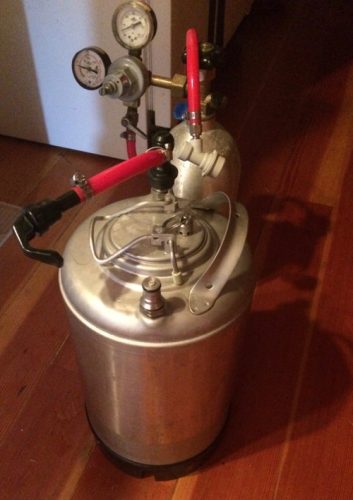 This year’s model wasn’t ready yet. Jonathan is planning to make vinegar and applejack from cider this winter, so stay tuned.

We finished off dinner with wild huckleberry tarts and a pie made from butternut squash we grew: 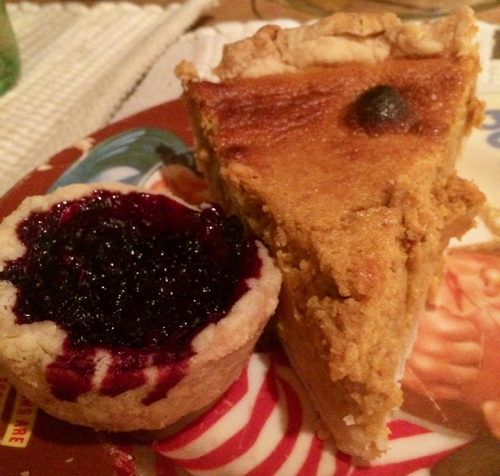 It was a wonderful evening. I’m very thankful for my family. No matter what life throws at me, they are always there for me.