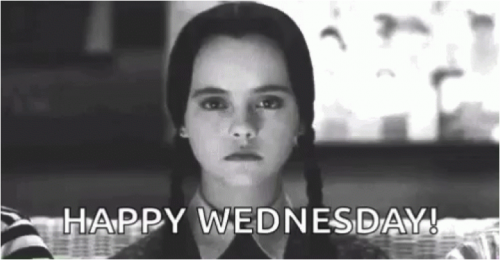 Or unhappy Wednesday, as the case may be…

One day as I was driving home from work, I noticed that Wednesday was making an alarming creaking sound. I got more alarmed the creakier it got. I called my brother and he said to drive her on over that weekend for him to take a look (or listen). He thought it might be the bushings (whatever they are), and suggested that I take Wednesday to the place I buy tires to get a front end and brake inspection. He also thought I needed new tires, and while I might be able to get away with only getting two new ones, it was probably better to get all four.

Unfortunately for me and my ever-tenuous resources, my tires were considered “marginal” by the tire experts. My brother was correct about the bushings (whatever they are), since they were “torn and broken”. Besides having no idea what they are, I have no idea how I tore and broke them, which sounds pretty violent and also memorable. Oh, and I had 10% left on my rear brakes. At least I still had 85% on the front ones, which do most of the work.

I was presented with a truly alarming estimate for the work needed to correct all these mysterious problems, as well as all four tires. I gave it to my brother, hoping he and Rob could do the work. I had a hard time reaching him, and in the meantime was driving around on my marginal tires with my 10% rear brakes, which was almost as alarming as the estimate for fixing them. Eventually my brother and I caught up with each other, and basically he said he would not have time to do the work in the foreseeable future.

So I went back to the tire place and signed over my paycheck to them in return for all this, as well as an alignment and maybe some other stuff. The last time I bought tires was in April of 2017, and considering the state of the rough country roads I drive on and the fact that I drive about 250 miles a week just to work and back, it’s probably about as much as I could expect to get from the tires. I am careful about checking the tire pressure and getting them rotated in the hopes of making them last as long as possible. At least I can be confident that I can stop the car, which, as my brother says, is the most important thing a car can do. And I have new tires before the rain starts up again.