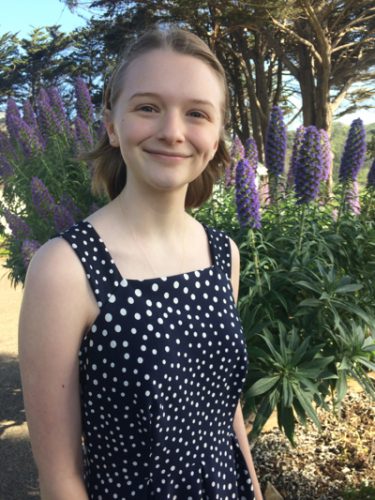 It was a postcard day as Megan and I headed to the beautiful Valley to pick up the equally beautiful Jessica for her birthday dinner. It had been a long time since we had driven in that part of the county, so we took our time admiring the springtime scenery. The rolling hills were still green with the winter’s rains, and wildflowers were everywhere: frilly pink rhododendrons, fiery orange California poppies, waxy white calla lilies, and lavender lilacs. The air was bright with birdsong and the vines hazed with new green leaves. Baby lambs and calves played in the meadows. Spring is a beautiful time of year here.

The destination for our somewhat belated celebration of Jessica’s 15th birthday was a charming inn perched on a cliff overlooking the ocean, allowing for spectacular views: 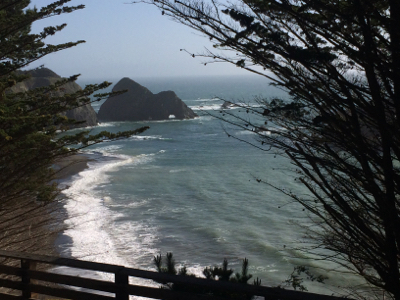 The restaurant itself is in a little corner of the inn’s lobby, overlooking the sea: 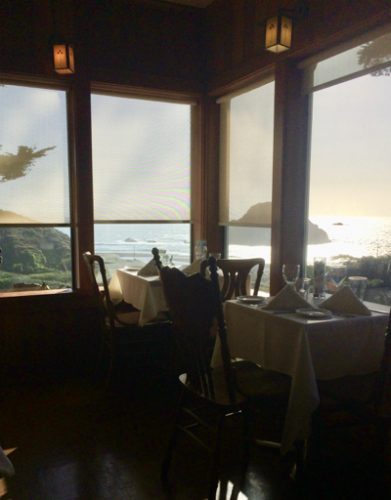 It is called Chez Marie, and you truly feel that you are chez Marie. Marie does the cooking and also acts as hostess, so you feel as if you are visiting her home. She is from Normandy, and her cooking shows her origins in the most delightful way. 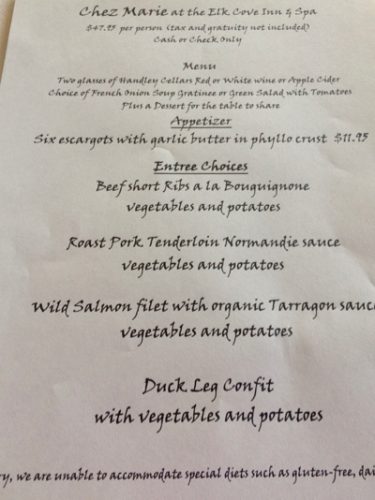 I like how the menu tells you that they do not accommodate vegans (“sad rabbit food”, according to Jessica), gluten-free or other crazy diets. The gluten free loons would be missing out here, since freshly baked bread arrived at our table still hot, accompanied by fresh butter.

Megan and I started with the delicious French onion soup: 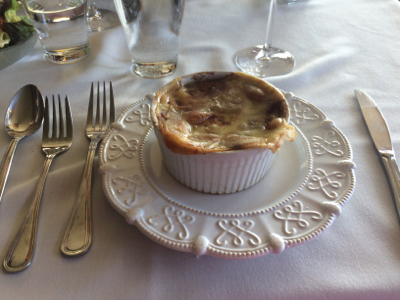 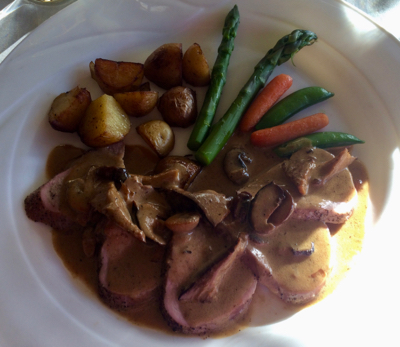 I have never had such tender pork. The sauce was delicious and not at all heavy. Marie says it’s because she doesn’t use flour. Jessica was delighted with her duck leg confit accompanied by cassoulet.

Marie gave us a dish of escargots in delicate phyllo cups in honor of Jessica’s birthday: 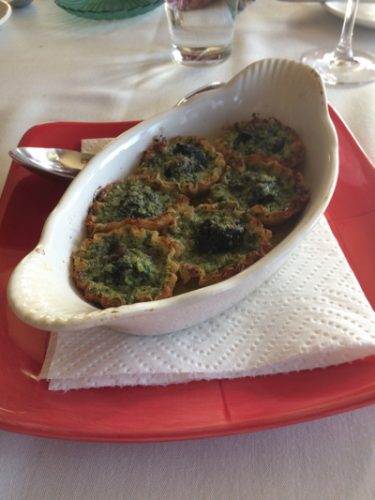 Both Jessica and Megan had never had escargots before, and both agreed that this was the perfect place to try them. They were replete with butter and garlic, and the correct texture and size. So often they are huge and rubbery. The phyllo cups were positively lacy.

All this was accompanied by what the menu calls two glasses of local wine, but which was really the server pouring wine all through the meal as soon as our glasses got a little low. Megan had to cut them off since she was driving. Jessica had apple cider instead, Marie observing that in France Jessica would have wine, but here…

We finished this memorable meal with profiteroles, Jessica’s adorned with a lit birthday candle. She considered her wish very carefully before blowing it out. If her wish was to return to Chez Marie on her next birthday, I’m pretty sure it will come true.

A YEAR AGO: Taking a day off.

FIVE YEARS AGO: A delightful day in the Village, followed by a delightful evening at the theater.

TEN YEARS AGO: Apparently I was being coerced to go to Florida.