The Plague is finally beginning to lose its death grip on our heroine, but after all this time, I am still not fully restored to health and sanity, though of course I am back at work, having burned through 42 hours of paid time off without the advantages of having fun, getting rest, or restoring my severely depleted batteries.

I also failed to enjoy the short weeks over the holidays, being fully occupied with being sick, and now I’m back to the five day a week grind, staring down the barrel of a 12 hour day yesterday and the ordeal of the annual fundraiser, which is of course this month. Basically I am still living on Vernors ginger ale and Jacob’s Cream Crackers.

I haven’t seen Mark yet this new year, but I see his dogs every day when I get home from work, and they greet me with outsized and muddy enthusiasm. The current dramatis personae is sweet old Luna; pretty Lupe; cute little Blue; and super bouncy Kovu. This is Kovu: 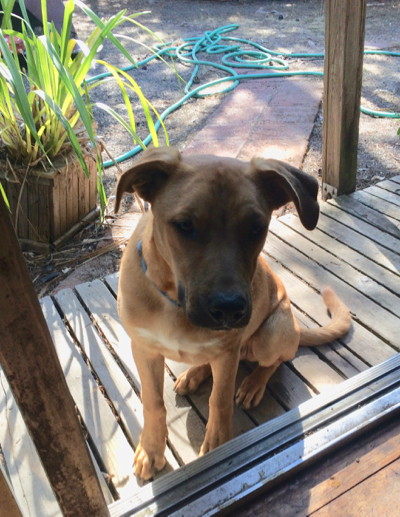 For some reason, Kovu used to be horrified by me, but he got way over that stage, and now he has the enthusiasm of the converted. If I don’t get out of the car fast enough to suit him, he climbs muddily in, to the detriment of Wednesday’s upholstery and my work wardrobe. I think he would like to move in with me. I might like that too, but Queen Audrey would object and little Clyde would be scared, so for now, all Kovu petting has to take place outside.

As for inside…I went to dig out some potatoes from the buckets in the studio the other day and discovered that potatoes were not all that was in the buckets.

It appeared that Audrey decided that the potato buckets were her personal litter boxes. Undoubtedly, she considered it very thoughtful of the Staff to have so many of them available for her exclusive use, since Clyde has never thought outside the box in his life.

The Staff, however, was less thrilled. An informal survey revealed that Audrey’s contributions were more than surface deep, so I ended up hauling all the buckets outside in the rain, with plans to empty them into the woods if/when I feel up to it or can persuade the long-suffering Rob to do so for me.

A YEAR AGO: The power was on an extended vacation amidst stormy weather.

FIVE YEARS AGO: Be careful what you wish for.