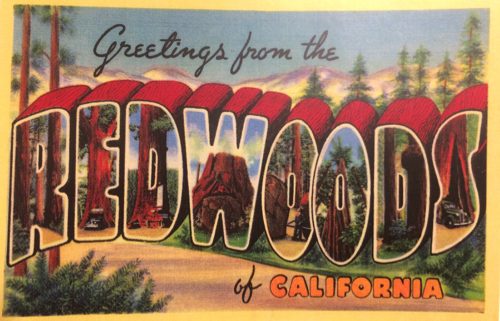 Hello from the redwoods!

You’re right, there are redwoods in Hooterville, too. But it’s just one of those California things that you can drive for hours and still be in your own county (or just over the county line) and still be in the same area code.

As usual, my travel plans did not exactly go as planned*, so I didn’t end up in either the tropical Trinidad or the California one. I did make it to the drive thru tree: 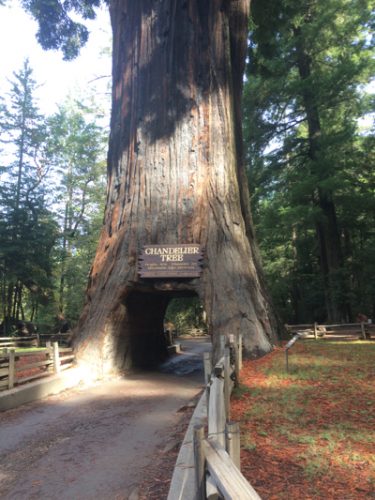 but I couldn’t drive thru it. It soon became clear that Wednesday would not fit through it. I guess cars were smaller when the tree was hollowed out in the 1920s. So I drove around, not thru, and was more disappointed than this warranted. I noticed that mine was the smallest car in the lot, so I asked a merry Asian family who were busily taking photos of each other if they had driven through the tree. Yes, they had, they said. They had folded up their side mirrors to make their car flapper era slim.

Filled with hope, I checked Wednesday’s ears and then the manual, only to learn that she was not equipped with this convenience. I got a postcard to commemorate the occasion and hit the road again, feeling sad out of all proportion. I was not too dejected to stop for lunch at the Peg House, since you never don’t stop at the Peg House. They even have an actual phone booth: 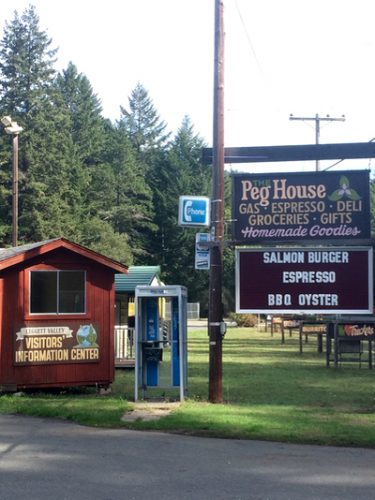 They also have a nice, sunny patio where I had a sandwich and freshly squeezed lemonade and considered whether I really wanted to drive all the way to Trinidad, and decided I didn’t. So I looked for somewhere to stop and found a quite nice motel room somewhere north of the drive thru (or drive around) tree: 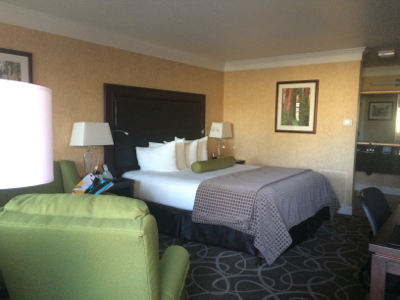 I am pleased to say that there is a bathtub for wallowing in and that I am equipped with a bottle of wine and a Chinese restaurant delivery menu.

*For someone who worked at a visitors’ center for years, you’d think I’d be better at this.

A YEAR AGO:Vertigo reared its ugly head, but I worked through it.