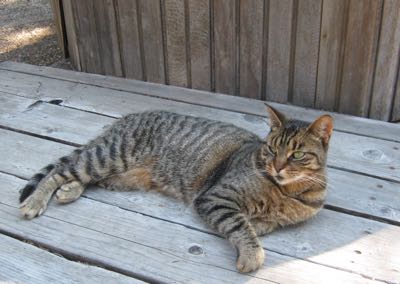 It’s the ninth anniversary of Audrey arriving on the planet and showing it who’s boss this Saturday. She shows no signs of slowing down or becoming less obnoxious with age. She still terrorizes Mark’s dogs and bosses Clyde and me around. Clyde and I are equal recipients of Audrey’s patented stink eye and passing swipes.

She continues to have her special privileges, such as going out first thing in the morning, when it’s dark and scary out. Possibly the Monsters are also afraid of her. When she comes back in, which is pretty soon these days, she hops up on the table for her welcome home treats. Clyde gets his on the floor, and Audrey will not eat hers if she is on the same level as Clyde. Nor will she come in a door if he is there. I usually have to pick him up so she will come in when she returns in the mornings, even though Clyde squirms like crazy for fear of missing the impending welcome home treats.

Lately, Audrey has been usurping Clyde’s favored spots. I have found her sitting on my desk and looking outside, and also sleeping on the armoire, usually Clyde’s favored napping spot: 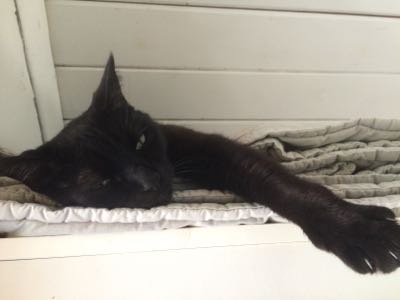 unless it’s too hot, in which case he dozes on the stairs in the pathway of the fan’s breeze.

It’s been a pretty warm summer so far, so it’s good that Clyde has successfully overcome his fear of ice cubes: 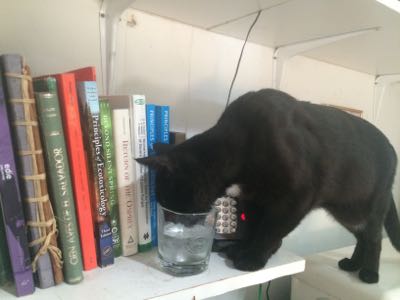 because there is ice in my drinks more often than not these days. At least he avoids the adult beverages.

It’s a particularly festive weekend for Audrey’s birthday this year. It’s a holiday weekend, which of course it should be, but it also marks Megan and Rob’s 25th anniversary (today!) and Lu and Rik’s wedding (tomorrow!).

All you need is love. And cats.

A YEAR AGO: Things were on the stinky side at Suzy Manor. Much, much later – and not reported in these pages – the true source of the Smell was discovered. It was the remains of an extremely dead rat housed in the grandfather clock. Still don’t know how it got in there and closed the door behind itself, or why it didn’t just push the door open and get out. Yet another mystery for Nancy Drew! This one will remain unsolved, though. ~shudder~

2 comments on “The Kitty Report”