My former boss gave me a very generous gift certificate to the Ledford House, where I recently met my friend Jim for a drink in the bar, and taking Megan out to dinner on her birthday seemed like the perfect use for it.

It was also a perfect day to be at the restaurant, which has a stunning view of the ocean. It looked like a postcard as we took our seats by the window. The server overheard me saying it was Megan’s birthday, and brought us complimentary birthday champagne: 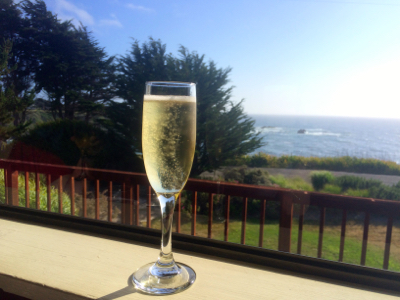 Are there lovelier words in the English language than “complimentary champagne”? Well, there’s always “taxi” and “doorman”…

We toasted Megan’s birthday and I couldn’t help remembering the day she was born. I was called down to the principal’s office, walking through the empty, echoing halls. My nine year old body was full of dread and my nine year old brain was paging through the things I had done wrong and the things I could have been caught doing wrong. Arriving at the office, the motherly secretary told me that I had a baby sister. I don’t know if I was more excited about that or the fact that I hadn’t been caught at whatever mischief I had recently been perpetrating.

I skipped merrily down the hall on my way back to my classroom, where I shared the news. The girls all choroused “Yay!” while the boys chimed in with “Boo!”

Meanwhile, back in the present, my now grown up sister and I received a little white ceramic tray with spiced olives, house-made bread which was crusty on the outside and springy on the inside, and a tiny white ceramic pitcher of fruity olive oil to nibble on while we considered the menu.

I considered that since local sparkling wine made by Roederer in Anderson Valley (Roederer’s French vineyards make Cristal) was only $4 more than ordinary still wine, we should stay bubbly, my friends. With that important decision made, we turned our attention to the menu.

We shared a head of garlic, roasted whole with fresh thyme and olive oil, the top cut off to expose the caramelized cloves. We spread the cloves on wafer thin crostini and topped it with fresh chèvre. Simple but delicious.

Megan had gnocchi, which she said was the lightest she had ever tasted: 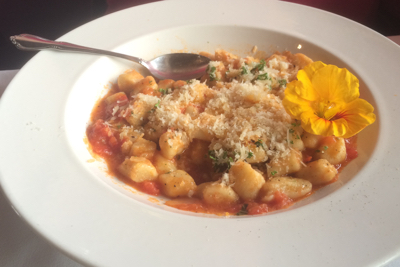 and I had mussels, on Dad’s principle of getting a dish at a restaurant which you would not cook at home: 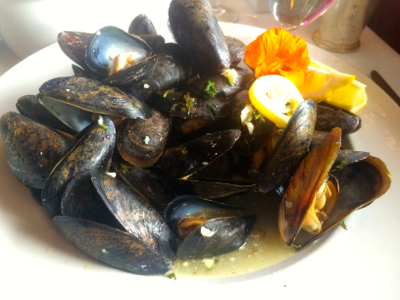 The gnocchi were the lightest I have ever ever tasted, and the mussels were served in a complex white wine broth, garnished with a nasturtium and served with a rich, spicy aioli on the side. There was a bowl thoughtfully provided for the discarded shells. The bill came to $16 after the gift certificate was applied, and it helpfully listed what 10, 15 and 20% tips would be so no after dinner math was required. I left a $40 tip. The service was great – there when you wanted it, not when you didn’t, not too chatty and not too unctuous. And the server was probably in high school. The owner does a great job of training his staff.

I honestly cannot remember the last time I had a fine dining experience. The food and the view were great, the atmosphere was casual but refined, but most of all I think I enjoyed the feeling of being cosseted and taken care of. It was a wonderful evening.

A YEAR AGO: File under miscellaneous.