My culinary errands were not 100% successful. I found myself unable to face the line at Swan’s. Even at 10:30 am, the line was a block long and my patience wasn’t. I also struck out at Bob’s Doughnuts, where they were sold out of old fashioneds, so I settled for two cinnamon cake doughnuts. Of course Victor’s never lets me down, and I bought a surprise pizza for Megan and Rob to thank them for their cat sitting while I was away.

It was a bright, sunny day as I left the city, the Bridge gleaming International Orange in the sun, the white sails of boats dotting the blue Bay and the pastel houses tumbling down the hills. The hills closer to home were the deep green of winter, but starred with California poppies, daffodils, and calla lilies. The vineyards slept, but around them trees were hazed with green leaves and clouds of pink and white blossoms. Weeping willows dipped their long fronds into rivers that are rivers again instead of trickles.

Through the tall, dark, and handsome redwoods and out to the ocean, which was showing off for me. For the first time in three years, I missed my brother’s Polar Plunge, where he jumps in the freezing water to benefit Special Olympics, usually after singing a song while in costume. This year, it was “Under the Sea” from “The Little Mermaid”, and Megan was there to cheer him on and send me this photo of our merman after the jump: 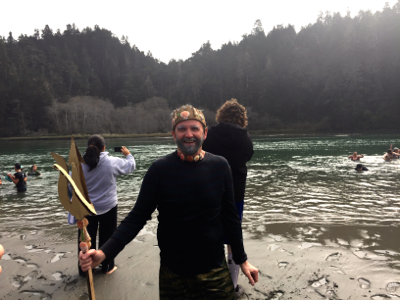 I am so proud of him!

Arriving home, I was greeted by Luna and Lupe, wagging their tails and jumping for joy as I petted them, and Megan, who happened to arrive home at the same time. Megan was much more helpful at unloading the car than the dogs were. Pets, I have noticed, never feel that they need to lend a paw with the housework.

Megan’s delight at the unexpected pizza delighted me. And it was nice to have unloading help. As we worked, we caught up on what had happened during my short absence.

Clyde came running to me, meowing his distinctive ClydeSound(TM), and I picked him up and cuddled him while he purred and pressed his head against me. Audrey, of course, does not permit such indignities as Being Picked Up, and she kept swatting me every time I passed her. I’m not sure if she was asking for attention or letting me know how annoyed she was at my absence, but hey – it’s Audrey. She also chased Lupe and Luna away with her tail all puffed up and giant.

My house seems amazingly quiet after Monterey and San Francisco, with their traffic and sirens and people yelling and honking. All I can hear are frogs peeping and cats purring. I’m really glad that I listened to Megan’s advice and came home on Saturday, so I have all of Sunday to relax and get ready to jump back on the hamster wheel on Monday.