One day last week, I picked Rob up from Lu and Rik’s house on my way home from work. Lu and Rik just got engaged after 17 years together, and the wedding is planned for July 2, so there was a lot to talk about before Rob and I loaded ourselves and the dogs into the car.

I waste no opportunity to be chauffeured, so Rob took the wheel. Megan said later how gangsta my black car with its deeply tinted windows looked with Stella the pitbull stereotype in it. The fact that Rob and I are about the whitest people on the planet undoubtedly spoiled the effect.

As we drove along listening to the late, great David Bowie and chatting about this and that (I will never cease to be entertained by the way Rob thinks), Stella slowly but surely oozed her 65 pound self onto my lap. She did this by first peeking her giant head between the seats as if she was just admiring the view* through the windshield, then putting one paw on my leg, then another paw. To be fair, her back legs remained on the back seat with Star, who was curled up neatly, so she wasn’t totally in the front seat.

I had such a great time with Rob and the dogs that I wish I could do this more often. It was the high point of the week.

Later in the week, I picked up Michael, the older gentleman who I am happy to chauffeur whenever I see him and he needs a ride. He usually rides his bike, but he had made a trek to the Big Town that day, which meant walking three miles to the Gro to get the one bus that goes there each day and then getting home from the Gro when the bus dropped him off.

I couldn’t find a place to stop and pick him up when I first saw him, so I drove until I could turn around and go back to where he was. Maneuvering Wednesday’s short turn radius meant that I took up most of both lanes of the Ridge, inconveniencing some neighbors so I could help another. They all took it well, though.

Michael is adjusting to his new-ish place. As he observed, everything has its positives and negatives and it’s more positive not to focus on the negative. I set him down at his little cottage and we parted with a hug and a smile.

When I got home, I found Rob hard at work in the vintage trailer where Rose used to store her pottery equipment. I store non-pottery related things and stuff in there that are damp resistant, and Rob uses it as a workshop from time to time, like he did when working on the bathroom door.

This time, he is working on a beautiful shelving unit to house some still boxed up books in the studio: 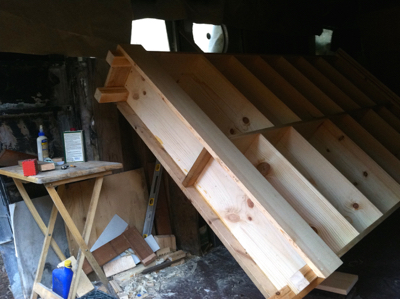 Being Rob, there is a cornice on top, the edges of the shelves are beveled, and there are little feet, so it’s more like furniture than just a bookshelf. He even cut out little wood circles to fill in the screw holes so they wouldn’t show. It’s going to look great.

*To be fair, Stella does like to admire the view. She often sits and watches the ocean or observes birds for a long time. I have never known another dog to do this.

A YEAR AGO: Farewell to my friends at the jobette. ~Sob~