It was 44 festive degrees in my house this morning. The boys and I huddled by the heater while the intrepid Audrey went out to explore in the chilly sunshine. I hear that it’s colder here lately than in parts of Alaska, which just seems wrong. Hooterville: putting the “North” in “Northern California”!

With the big chill, we went through most of the wood that my brother brought over for the outdoor fireplace. I had thoughtfully equipped the outdoor living room with throw blankets, but they remained unused (though commented upon), unlike the pillows, candles and an ashtray or two.

Erica and Jessica arrived first, replete with boxes of delicacies: wild mushroom tartlet appetizers; caramelized Brussels sprouts; a truffle-rich pie made from a squash grown on our family property, and Tarte Antoinette, made with a layer of home grown quince transformed into membrillo and then layered with vanilla chiffon. Even by Erica’s extremely high standards, it may have been the most delicious thing she has ever made: 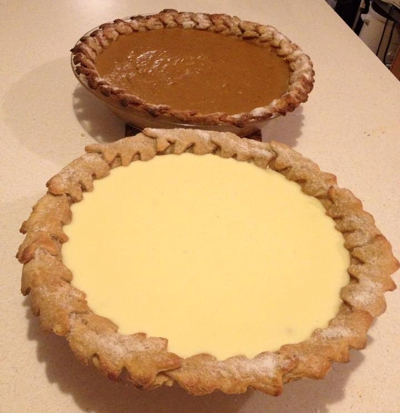 Jessica was sporting the world’s most fabulous (and possibly Suzy-est) hat and fingerless gloves ever: 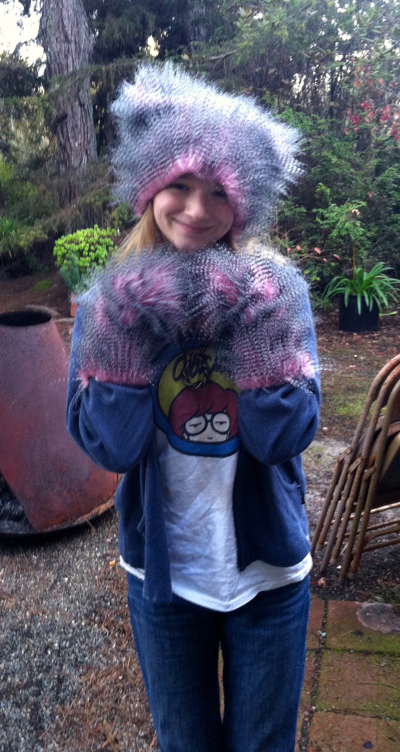 Needless to say, the ensemble, like Jessica herself, is an Erica original. Jessica returned the string of jade beads she had borrowed from the jewelry library last year, selecting a new item for this year. I noticed that all the items she has borrowed so far were given to me by my father.

Lichen still hasn’t realized that Thanksgiving (which is two days after his own birthday) isn’t a gift-giving occasion, so he brought a golden gift bag with artisan root beer for Jessica (“I’m obsessed with root beer!” she exclaimed happily). The root beer had a string of garnets fastened around its neck just for added Lichen-ness.

Jarrett and Kalli arrived with Kalli’s (very little) sister, who is five, and their dog, Archimedes, who was the World’s Cutest Puppy just three years ago, when he posed adorably on my couch. The cats did not find Archi adorable at all. Roscoe vanished for the remainder of the evening, while Clyde and Audrey repaired to the relative safety of the sleeping loft, where they could keep an eye on the intruder. The stairs did not, however, stop the kindergartener, who quickly and accurately assessed the situation: “That stripy cat is mean! But the black one is nice.”

Although she also opined that the dressing I made with the torturous chestnuts and Café Beaujolais Austrian sunflower seed bread “tasted like Subway”, dinner was great. In addition to Subway stuffing and Erica’s caramelized Brussels sprouts, there were mashed potatoes, carrots roasted with cumin and turmeric, fresh-pressed cider from the family orchard, freshly picked huckleberry tarts made by my brother, and cranberry bourbon relish. Jonathan sliced up the turkey after making a wonderful gravy: 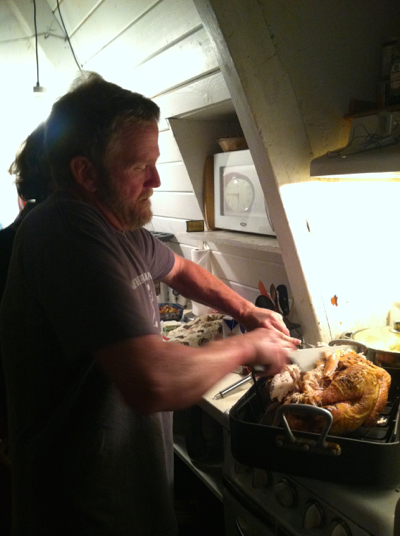 We used every single piece of my grandmother’s ivory handled silver and every single plate in the house. Once again, some how, some way, I pulled off dinner for 15 people in my tiny house, and everyone, from the kindergartener to Me (why am I always the oldest?) had a great time. It fills my heart with joy to have my house overflowing with family and friends.

After the guests left, Megan and I put on some music and sat by the dying fire with that bottle of Cointreau, talking about the evening and the Thanksgivings past as the moon shone down on us and the stars sparkled. Life is good.