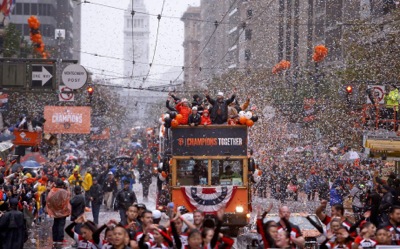 Showered with Confetti and Love

The Giants celebrated their epic World Series win with a parade down Market Street – San Francisco’s Main Street – to City Hall, where Marilyn Monroe married native son and baseball legend Joe DiMaggio 60 years ago. They were showered with showers, but also a hail of confetti and love. No stranger to triumphal processions through the City streets after two earlier World Series wins, manager Bruce Bochy said that he had never heard anything like the thunderous applause and screams that met the returning heroes, especially Madison Bumgarner, who was deafened with howls of “MVP” everywhere he went, perched on the back of a flatbed truck: 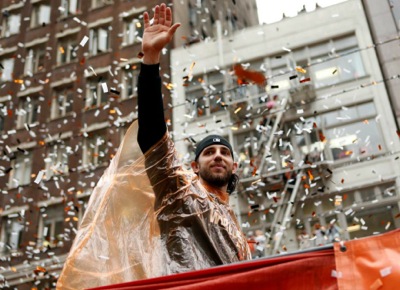 An observer described the pandemonium as “something between pagan idolatry and Beatlemania”.

I hope we get to do it all over again next year.

Meanwhile, back in Hoooterville, I woke up to a welcome inch and a half of rain in the gauge and a slightly less welcome forecast of heavy rain accessorized with possible thunderstorms and hail – definitely not ideal trick or treating weather. However, the forecasters were wrong, as so often happens, and there was really no need for me to haul along my winter coat and two umbrellas as well as wearing my rain boots.

This year, instead of going the Village as usual, we met Erica and Jessica at Jessica’s friend’s house. It was more of an estate to my mind than a house, since it included sweeping vineyards and several outbuildings. There was a cauldron of tea and a buffet of Halloween food: 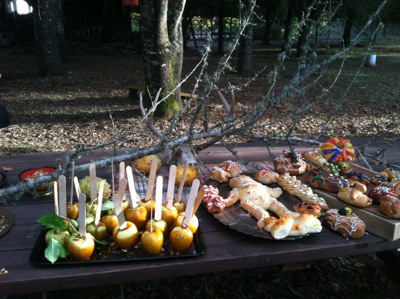 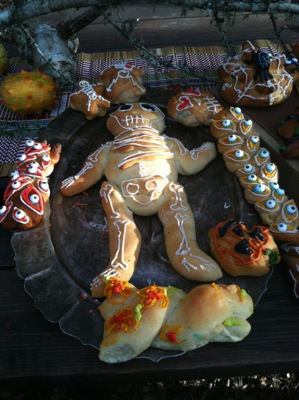 Both Erica and Jessica had made their own costumes, though Erica did add the zipper to Jessica’s dress. They were Undead Alice in Wonderland and the Red Queen: 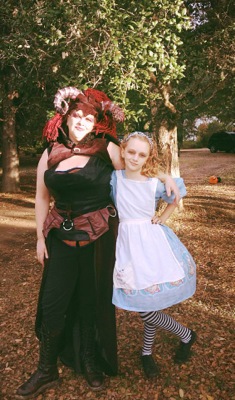 Here’s a close-up of Jessica’s apron. It’s hard to tell from the picture, but she embroidered “We’re all mad here” and made the teeth all texture-y: 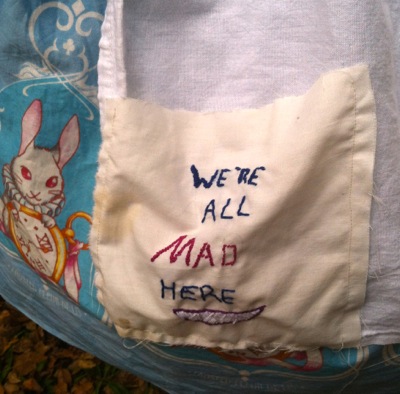 Erica made her entire costume other than the boots, including the horns, yarn wig, corset, velvet cape, etc. You can see these girls share genes and attitude!

Erica also brought kitty ears for me to wear: 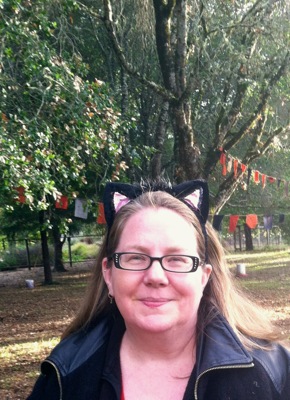 We had the following text exchange:

Erica: Cat ears are black with pink inside and some sparkle. 🙂