In order to tell you something really cool, I’m going to have to show you something really embarrassing. Not that it should come as a total shock to you after reading about my house’s eccentricities for the past few years. I finally convinced Mark to do something about the horrors of my bathroom. You know, the room with: no insulation; no heating; a shower pan made out of painted wood where the drain is not the lowest part, so it doesn’t, you know, drain; a floor made out of electric green plywood…you get the picture. And here it is: 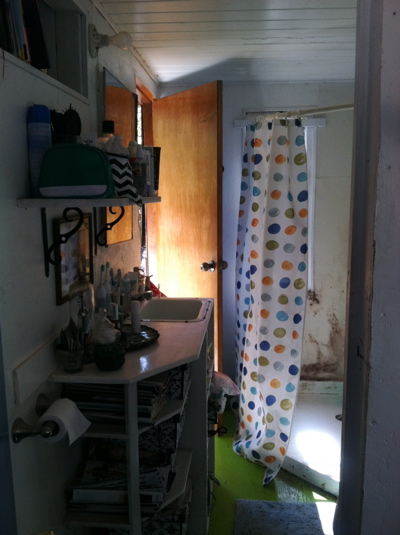 Whatever mystery panels were on the wall were, as you can see, impossible to clean. Even with straight bleach and a scrub brush. So I had kind of given up on the entire thing. The door is open to the back porch so you can’t see the window in the shower. It does kind of give you an idea of the scope of its awkward tininess, though, and a peek at the lime green floor. It’s a long way from the gracious bathroom I had in San Francisco: 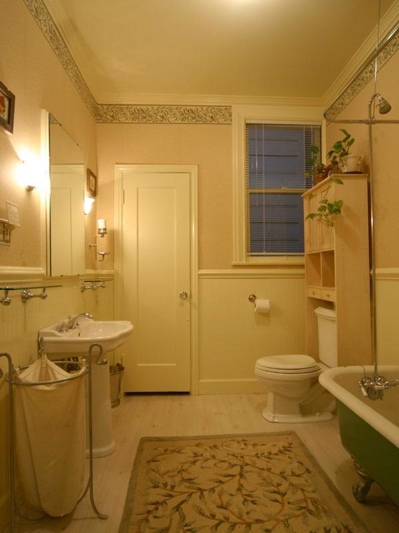 The project started off slowly, with an actual, real (I think plastic, though) shower pan appearing at my house, where it sat outside during a couple of late season showers and the first heat wave of the season. Then Rob appeared with some black and white tiles he had found somewhere. Yesterday, he said he’d start to work on it today, just in time for the second heatwave of the season.

I was pretty sure he wouldn’t find Jimmy Hoffa or a million dollars (finders keepers!) under the mystery panels. If I was on one of those HGTV shows, he’d find a horrible problem which would cost so much money that they could no longer afford the sixth bathroom or closet annex on their house, and they’d be both furious and devastated. Since this is reality, not to be confused with reality TV, he simply found that it was wet. So when I came home from the jobette today, there was a fan blowing onto the bathroom, which was converted into a job site: 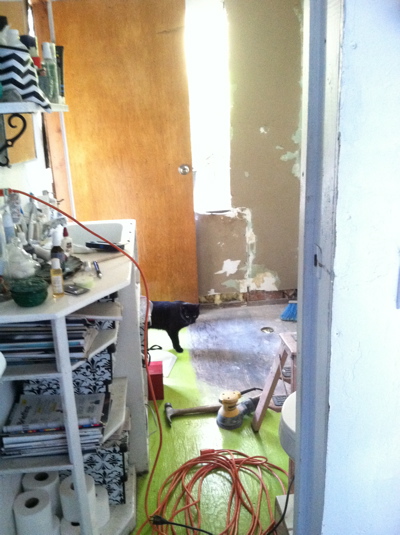 Clyde is inspecting it. Here’s the view from the back porch: 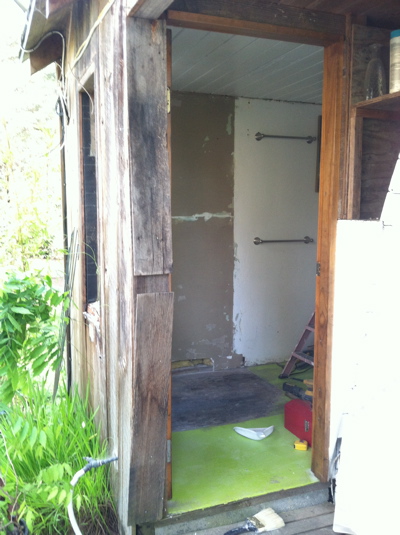 The window is gone, along with the shower, so I’m going to have to be really careful about going in and out of the bathroom tonight, since my goal at night is to keep Self and cats safely in the house and out of the darkness, which as we all know is The Enemy. I tried to call Rob to ask him about all this, but when I heard his phone ringing in the bathroom, I figured I should hang up and bring it to his house, where he wasn’t.

5 comments on “Home Improvements, Part I”