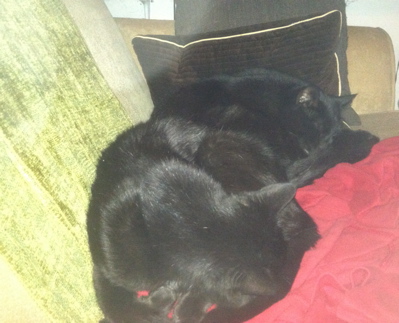 Yesterday, I woke up to the delightful and unfamiliar sound of rain on my curved roof. I knew it wasn’t enough to banish the drought which was recently declared in our County, but I enjoyed the sound. We got half an inch, but now we’re back to sunny skies (or clear, or fair – what’s the difference?) with a faint chance of rain on Friday at the earliest.

As for me, I’m better, but still tired, coughing, and using enough Kleenex to make me wish I’d bought stock in the company. Is it insider trading if you know you’ll be using the product by the gross for an extended period of time? Come to think of it, that’s probably the definition of insider trading.

Anyway, I’m sick of being sick and disappointed that I’m not completely better after more than a week. Of course, I’m still well enough to work, just not to do anything fun. Megan and I were planning to see a live broadcast of the National Theatre’s production of “Frankenstein” at the beautiful Arena Theater on Saturday, but we both reluctantly agreed that I wasn’t well enough. I really wanted to see it – it stars the delightfully named Benedict Cumberbatch, also the shining star of the BBC’s stellar series Sherlock* – not to mention the proximity of Franny’s of the magic coffee and cuteness.

But cooler heads prevailed, and I ended up watching the trashy soap operatics of Reign** (picture an even less historically accurate The Tudors crossed with the frothy, costumed delights of Gossip Girl) with the cats. Above you can see a non-great picture I took with my iPhone***. That’s Roscoe in the back. The boys hardly ever cuddle, so it was a nice treat.

*It’s finally back! And I’m not the only one who’s excited.

**I am officially old. Megan Follows, who played Anne in the “Anne of Green Gables” series, plays a wicked queen with a teenaged son in “Reign”. How did that happen?

**Which has yet to ruin my life.