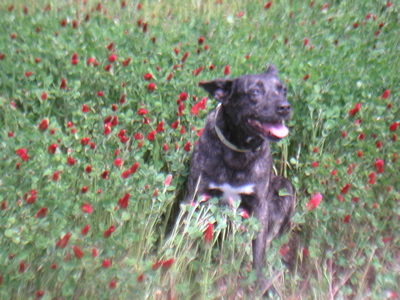 Schatzi in a field of clover, Spring 2010

Gordie: All right, all right, Mickey’s a mouse, Donald’s a duck, Pluto’s a dog. What’s Goofy?

Chris: He can’t be a dog. He drives a car and wears a hat.

Vern: Oh, God. That’s weird. What the hell is Goofy?

Megan has always wondered what the hell Schatzi is. When our mother pulled the princess to be out of a dumpster in Southern California, she thought Schatzi was a black dog. After a bath, her beautiful brindle coat appeared. Mom already had two dogs, so she took Schatzi to the local shelter, where they informed her that Schatzi was a pit bull and would therefore be euthanized. No chance of adoption, no nothing. Canine racism in action. The death penalty just for the crime of being a certain breed struck our mother as unjust and intolerable, so she took Schatzi home. She named her Schatzi, which means “treasure” in German, because one man’s trash is another man (or woman’s) treasure*.

Schatzi turned out to be at least two women’s treasure. Mom and Schazti moved in with Megan shortly after this, so Schatzi has been part of Megan’s life for most of her 15 years. And I think we can all agree that Schatzi owns Megan rather than the other way around.

I gave Megan a DNA testing kit for her birthday so she would finally know what Schatzi is (besides one of the most beloved and spoiled dogs in America). She got the results back, and….

Our Schatzi is at least 50% pit bull. As Megan observed, the Evils that Be at the SoCal shelter were correct in their identification of her as a pit bull, or at least a pit bull mix. The remaining 50% is unknown, though some of their suggestions seemed odd to me. White German Shepherd? Chow? Really?

Megan is dying to know about the mystery 50% and is thinking of getting a blood DNA test, which has a wider database and more accuracy. I don’t think she’ll have much trouble taking Schatzi’s blood. When Megan was thirteen, our father had Megan dissect a bird in front of his scientist colleagues at the University of Siena in Italy. They were all impressed. Dad just took it in stride. Hardly surprising that his youngest child is looking for scientific answers to a mystery.

*It can also mean “sweetheart”. When Dr. Carl, who is German, first met her, he exclaimed, “She is a Schatzi!”

6 comments on “The Envelope, Please”