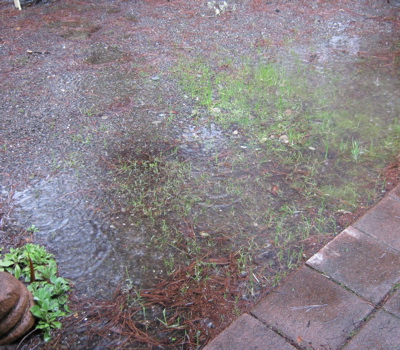 My back yard now doubles as a pond

Well, the experiment failed. Or succeeded, depending on how you look at it.

At first, I thought it was Clyde, since there were at least four claws digging into my head, but it turned out to be a giant plastic dragon. I removed it, and to be completely honest with you, there may have been a certain amount of swearing involved.

I set the dragon beside me on the couch, and figured that would be the last of it, until Clyde started chewing on the toy attacker. I then put the dragon away and Clyde outside.

What else can you expect when you name your cat after a notorious outlaw?

I’m thinking that we might have to remove the shelf and hang the painting higher to keep it out of paws’ reach, but having seen Clyde leap from the bed to the top of the armoire and from the glass roof of the back deck to the ground in a single leap kind of makes me wonder if we could ever hang it high enough to escape him.

While all this has been going on inside, it’s been raining like crazy outside. Frankly, I find it astonishing that there can actually be any rain left to throw at us. My neighbor Jim, whose serendipitous encounter with some unexpected snow made him an internet sensation, tells me that he emptied out his rain gauge on Tuesday evening and by Thursday morning, there was 3.6 inches of rain in it. Also that he collected a further 1.5 inches since yesterday morning.

This proved to be too much for my laundry room, which was awash in water which had somehow seeped in through the walls. Fortunately, there’s a drain in the floor, which has also come in handy when there was a booze flood in there. Booze floods, being attacked by giant dragons…I really know how to have a good time.