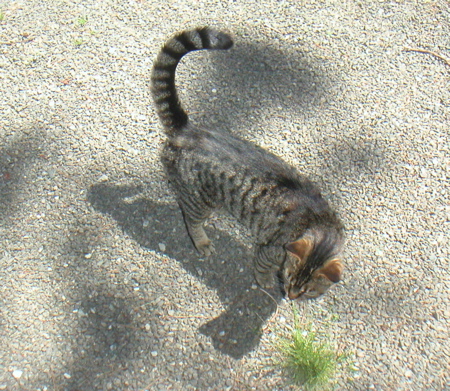 Audrey in sunlight and shadow

It was country dark by the time I got home. The city-dwellers among you would be shocked by the totality of the dark, with no streetlights or ambient light other than the stars and a crescent moon.

Driving through the tall redwoods near the end of the drive (we refer to the steep, switch-backed part of the road after Route 128 becomes Highway 1 as “the home stretch”, even though it’s about 7 miles home from there) was quite creepy, with the ancient trees looming over the road, impenetrable darkness outside the comforting glow of the headlights. I tried not to think about Stephen King stories or monsters bursting out of the woods, with varying success.

Arriving at my pitch-black house, I discovered that I couldn’t park in front of it. There was a bunch of chairs blocking the way, so I used Catrin’s space instead. I went inside my house through the surprisingly useful bathroom door on the back porch, closed it, then opened the bathroom door to the hallway. Audrey ran in, and was trapped again for her trouble, as I took a flashlight and unpacked the car.

Once everything was safely in the house, I released my poor kitten and gave her treats. She was very happy to see me. I don’t think either of us enjoyed our day apart. I later learned that Rob came by to check on her, and she was meowing sadly at the door and so lonely that he came back after dinner to sit with her. She’s never been left completely alone before – she always had June Bug, even before she was born – so it must have been hard on her.

I wonder what she thinks about her disappearance. Both girls knew Henry Etta was dead, having sniffed and inspected her, but Audrey must wonder the same way I do. She seems to be adjusting to her nightly imprisonment. She sleeps with me sometimes – which wakes me up with June flashbacks – and although she does claw at the door, especially once day is beginning to break, I just have to suck it up. Better lost sleep than a lost cat.

On the drive home, I thought that this whole nightmare could have been avoided if I had just stood firm and kept them in at night. In retrospect, I cannot believe I ever let my little girls out in the inky blackness full of unseen predators. It literally makes me sick to know that the loss of the magnificent June Bug is entirely my fault and was as preventable and senseless as my father’s death.

Yesterday, Catrin’s cat Fiona wandered in and gave me a shock. Audrey saw her too, and stared for a moment, then ran over to her at warp speed. Realizing it wasn’t June, she shooed her out of the house, and then came over to me to be petted. We sat together for a while, both thinking of our June Bug and, I think, taking comfort in each other’s presence.