This sleeping beauty was awakened with a kiss on Thanksgiving morning.

My sister stopped by on her way home from work to make sure I was awake. She even made coffee, and there are few things nicer than lying in bed and smelling coffee you didn’t have to make yourself.

After checking with Erica, I learned that she was bringing pumpkin pie. As a family, we are the pickiest eaters ever, and in retrospect I feel quite sorry for my parents and understand all the cocktails that feature in many of our childhood photos. Every year, my mother would ask Jonathan if he wanted a piece of pumpkin pie:

I know that he never did like it and still doesn’t, so I decided to make an apple pie. I haven’t made a pie in years, but it’s surprising how it comes back to you. I’d say it’s like riding a bicycle, but that is one of the many accomplishments I don’t have, so I’ll just say it was easy as pie.

I was about halfway through when I realized I was making it the way my grandmother used to. If you look carefully at the picture, you can see that I pricked the crust in the shape of an apple with a leaf, the way she did: 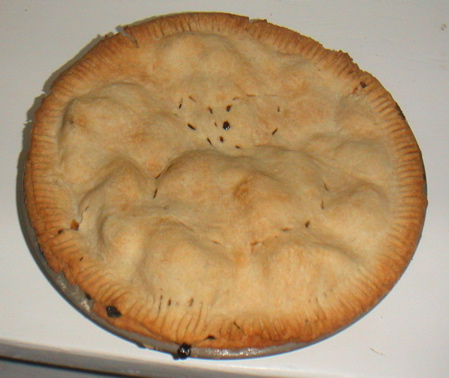 The turkey brining seemed to be successful. After brining it for 24 hours, I rinsed it off and let it rest for a further 24. On Thanksgiving Day, I mixed herbs from Megan’s garden with butter and rubbed it under the skin and then roasted it.

It was a pretty simple menu: turkey, mashed potatoes, cranberry-bourbon relish, green beans, chestnut dressing, gravy, and two kinds of pie. We had hard cider the boys had made last year to accompany the feast. It wasn’t until we were all eating that I realized I had made nearly the whole thing.

After dinner, we gathered around the chiminea outside, laughing and talking. We all have a lot to be thankful for, especially each other.