I’m kind of surprised by how upset I am over losing the original of this post. I had a hard time putting it back together. And it’s not as good as the original.

Also, since I had internet problems when I was up there last week, I got out of the habit of writing nearly every day. I find the more I write, the more I write. If I take a few days off, I have a hard time getting back in stride. Go figure.

Rose’s funeral fiesta was amazing. It was held at her former house, which will soon be my house. Dozens and dozens of people were there; kids ran around the garden and played on the trampoline. It turns out that I also have a swing, seen here being modeled by Jessica: 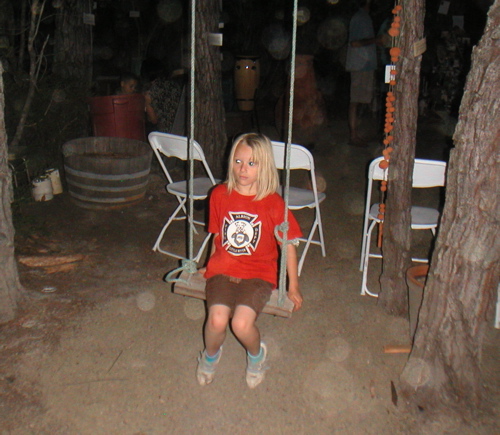 There was a buffet, and a bar with red and white wine, water, lemonade, and of course margaritas. Overhead, there were beautiful hand-cut banners with images traditional for Mexican Dia de los Muertos* (Day of the Dead) celebrations. Here you can see skeletons bearing a coffin, with lit candles on either side: 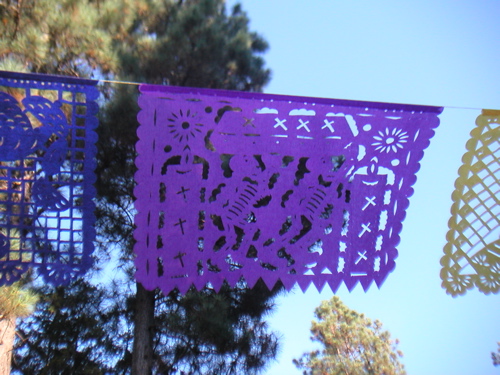 There were little shrines all over the garden, with flowers, candles, little sculptures, shells, and some of Rose’s work (she was a gifted potter and artist). I love the saw repurposed as art in the last photo: 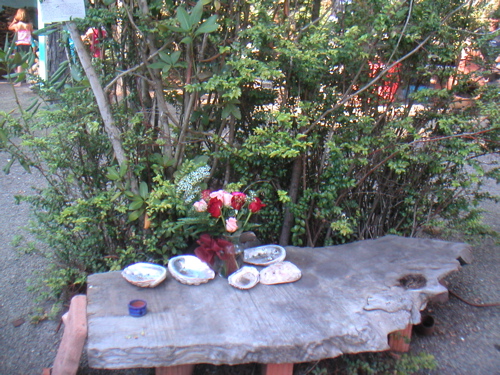 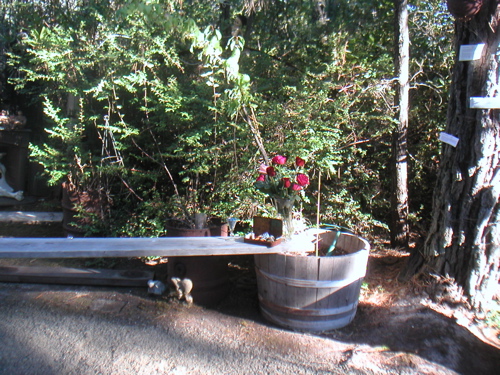 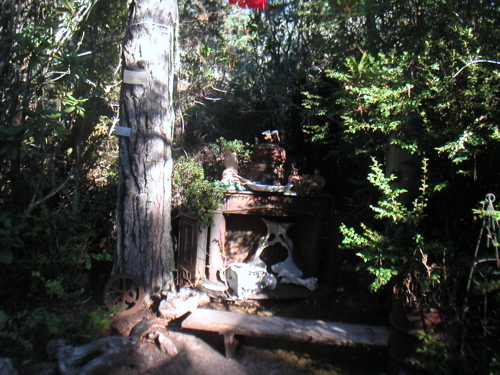 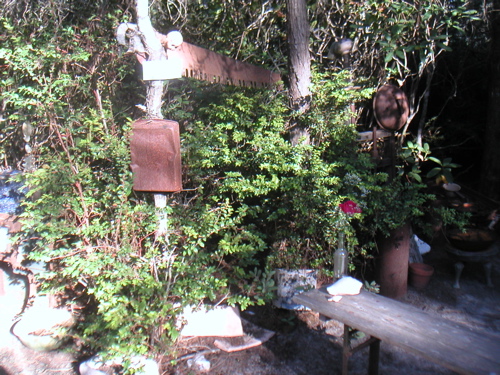 There was an altar for Rose, covered with photos from every stage of her life. My favorite was one of her sitting happily in a hammock, beaming with joy. 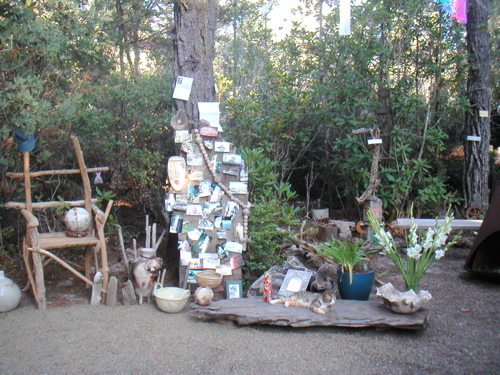 All over the garden, there were notes and letters to Rose and her family pinned to the trees. We also wrote messages in a little book. I have to admit that I was as proud as a mother when I saw Jessica write “I miss you Rosemarie. Love, Jessica” in the book. She signed her name in cursive writing, a new accomplishment. 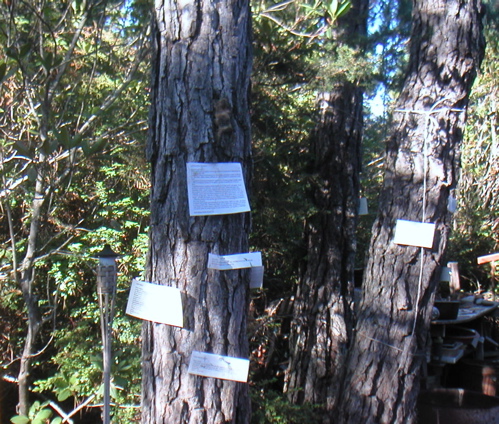 A mariachi band had come all the way from Santa Rosa, and serenaded us as we ate, drank, and talked. Erica set up a tip jar for the band before setting to work carving a watermelon to look like a flower. 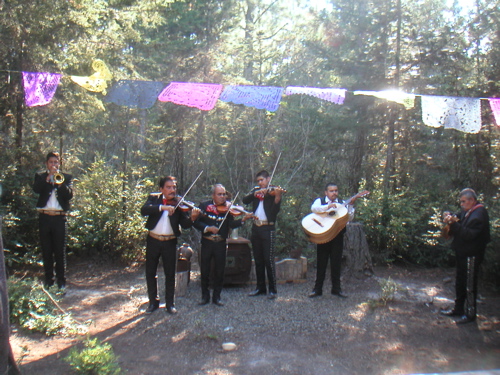 Mark, who was Rose’s son-in-law, announced the last song the mariachis would play. It is a traditional farewell song, and sounded to my untutored ears like “Los Galindos”. Mark says the title means something like “Little Birds”. It was a lovely and moving song. As the artists took their leave (and their tip jar), we moved our chairs to the part of the garden where Rose’s altar was.

A microphone was set up, and people got up and spoke about Rose, including her granddaughters and, remarkably, their friends, all of whom were less than 10 years old; the woman who had introduced James and Rose many years ago in Baja; and James’s cousin. There were laughter and tears, and many shared memories. Rose’s daughter Citlali recited a poem, and played a tape of Rose’s brother Axel, who couldn’t be there, singing Charlie Chaplin’s Smile.

As the sun began to set, Mark set a large chunk of clay beside Rose’s altar and invited everyone to take a piece and make a bead, which would be fired in Rose’s kiln. I patterned mine with little dots in spirals, and Erica made hers look like a little face. Here are some of the beads on Rose’s altar: 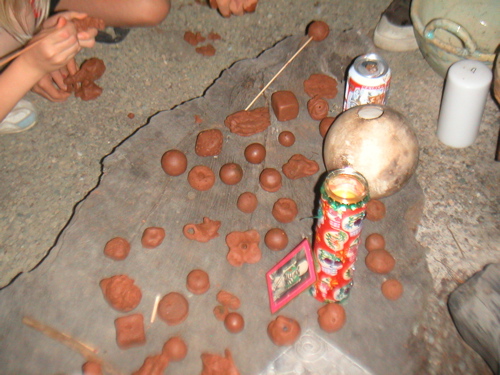 The celebration went on long into the night, with impromptu music provided by the guests, playing guitar, harmonica, and conga drums. Candles were lit and flickered in the moonlight. As Mark hugged me good-bye, he gestured around the garden and said, “She is everywhere here.” 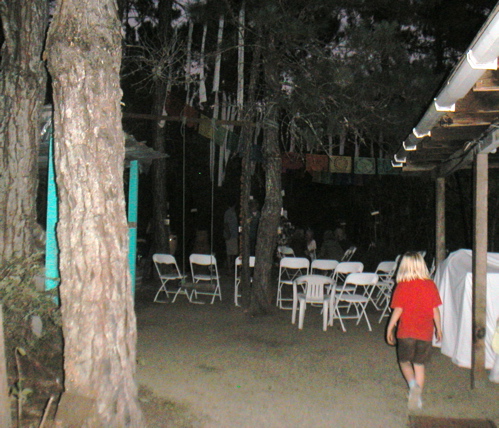 *It’s on November 1. My new landlords have offered to celebrate with us, so we can do something special for our parents. It’s the day after Halloween, when I will be the newest member of Jessica’s trick-or-treating entourage. Last year’s numbered six.

4 comments on “The Funeral Fiesta”