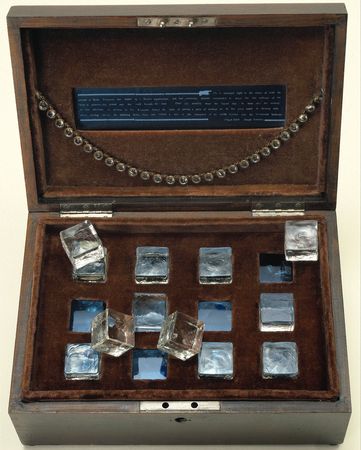 You will be amazed to learn that I didn’t unpack the boxes, or tidy up. A stunningly beautiful (and informative) New Year’s card from a kind reader informs me that house tidying is to be completed by January 1, according to Hogmanay tradition. So that ship has sailed. Unless she means January 1, 2009. That might be do-able. Maybe. If I can train the kittens to put things away instead of messing them up, which, like me, seems to be their forte.

Leaving the kittens to figure it out, and the boxes to unpack themselves, I skipped into the city to catch the Joseph Cornell exhibit at MOMA on its last day. I meant to go both Friday and Saturday, but the storms kept me cowering inside as the wind and rain beat down. On the bright side, I had finally mowed the lawn* the day before the storms hit (and I do mean hit). On the other hand, the power kept going out on Friday and I realized how unprepared I am now for emergencies. I used to have a whole kit and everything.

I took advantage of the lull in the storm to venture across the bridge. The exhibit was predictably packed, notably with San Francisco Snoots, who were too busy appraising each other’s outfits to bother looking much at the artwork, and with uncontrolled and/or howling children, being bargained with by their beleagured parents.

If amusement parks can have signs which say, “You have to be this tall to take this ride”, can’t art museums? I mean, come on. Amusements parks’ whole raison d’?tre is to attract kids and possibly make them sick while simultaneously parting their parents from their hard-earned money. Art museums, to the best of my knowledge, are not. So institute a “5 years old or older” rule and let the rest of us enjoy the beauty in peace. If the kid’s being dragged around slobbering and screaming in its mother’s arms, it ain’t working up a sweat with art appreciation, believe me.

Don’t even get me started on the whole “If you’re good, you get a cookie” thing. Kids don’t need choices and bribery, they need rules. They’re good in public because that’s what their parents expect. End of story.

And end of rant.

The exhibit was fascinating, spanning Cornell’s entire working life from approximately 1931 until his death in 1972. The boxes, of course, are his most famous medium, but there were also collages and film. My favorites were:

*The last time I mowed a lawn, I was 15. I used to quite enjoy it. On this particular occasion, I was unwisely barefoot and managed to electrocute myself. I still remember my heart slowing and the difficulty of pulling my hands from the electric field of the handle. I ran into the house sobbing about how I almost died. My father looked up and asked mildly, “Did you turn off the lawnmower?”

Like I’d touch that instrument of almost death after finally getting free of it! Dad went outside and turned it off. Nothing happened to him. I didn’t mow another lawn for 30 years.