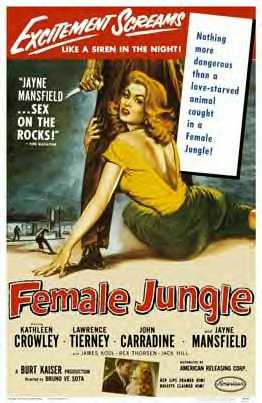 There’s no jungle in this movie, but there’s definitely a definite female in it – Female Jungle is the film d?but of Jayne Mansfield, a 21 year old aspiring starlet (seen here looking much like her daughter, Mariska Hargitay). Jayne plays the deliciously named Candy Price, a girl who definitely has her price (she answers the phone by purring, “What can I do for you, honey?” and proceeds to make a “date” with the caller while one of her lovers glowers in the background). Wearing skin-tight leopard print capris and asset-enhancing lam? top, she steals the show.

The film is shot in murky black and white, a literal film noir in which all the action takes place between 2 in the morning and sunrise. A glamorous movie star is murdered, and a drunk and disorderly off-duty cop played by legendary tough guy Lawrence Tierney is the prime suspect. The role can’t have been much of a reach for Tierney, who was infamous for being drunk and disorderly when he was off-duty, too. It’s said that he posed for more mug shots than publicity photos, and on the day his mother committed suicide in 1960, he was arrested for knocking down a girl’s door and assaulting her boyfriend. Despite all his misdeeds, Tierney ‘s career was long-lived – he made Reservoir Dogs when he was in his 70’s.

The other main suspect is the creepily suave John Carradine (seen here looking appropriately creepy), a gossip columnist who was in love with the dead starlet. Despite the creepitude, he manages to lure a young married woman (played by the lovely Kathleen Crowley) to his cool bachelor pad after 2 am, where she marvels at the speakers built right in above the fireplace, and the swimming pool. Of course, Se?or Suave has a bathing suit that will fit her…

Fortunately, by the end of the night, the real killer is caught and everyone can finally go home. The oddly named Bruno Ve (not De) Sota and Burt Kaiser share screenwriting credits and cast themselves in the film, too. Kaiser never made another movie, or wrote one, either. Drinking Swamp Juice (vodka, blue cura?ao, and orange juice) made this Jungle a lot more fun to watch!

It’s only right to end this mini review with a nod to fabulous movie fan and photographer Mike, who is trying to save his local movie theater. Happy birthday, Dad-Dad-Daddy-O!