Whether the power is off or on – and it has been staying on since the last weekend outage* – it’s been good cooking weather lately.

My current kitchen is much more functional than the one in the old house, which had maybe three feet of counter space. Yet I managed to make some memorable feasts in that teeny kitchenette. And even though my “new” house is so beautiful and much more reasonable than the old house, I still retain a nostalgia for the old house in all its craziness. I realize this makes no sense, but although I am many things, sensible is not one of them.

The new house has a big window in the kitchen, so I can watch the passing wildlife and birds while I cook. I especially enjoy looking out the window while doing things like making bagels or rolling the dough for har gao.

Speaking of har gao (as one often does), I might be making more this weekend. My good friend A recently sent me a recipe for pork and chive dumplings, using the same dough as har gao. She mentioned that she had a fair bit of filling left over. So my tentative plan for this weekend is to make half the pork filling and use the batch of dough to make some har gao and some pork and chive dumplings. I’ll use the rest of the ground pork to make lumpia Shanghai. This may seem like a less appealing prospect when Saturday actually rolls around.

Suzy’s Asian Kitchen has been open for business lately. I made a great batch of faux pho: 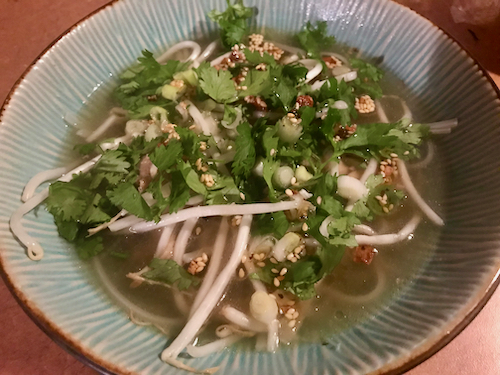 Instead of beef, I used chicken, and I poached it in Campbell’s broth with a bunch of spices. I strained it, took out the chicken and sliced it up, and served the soup with garlic-chili-sesame oil, bean sprouts, cilantro, green onions, and lime.

On the whole, I think Asian or Asian-ish food might be my favorite. It’s certainly been my default lately.

Last weekend, I made a Porchetta style pork roast. You make a paste of lemon zest, garlic, olive oil, fennel seeds, sage, and rosemary, score the skin of the pork roast, and then rub the paste in. Let it sit overnight and then roast it at high heat for half an hour and then at low heat for a couple of hours more, and it comes out like this: 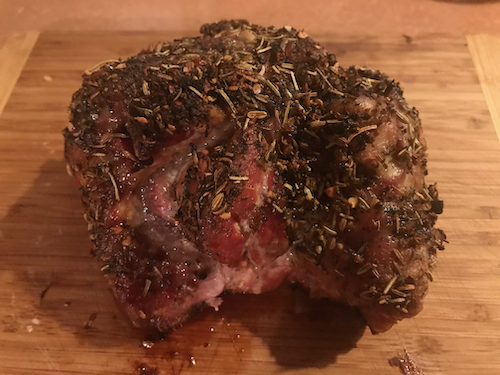 I had it with mashed potatoes and a salad dressed with home-made maple balsamic vinaigrette, and it was delicious if I do say so myself.

As the great Jacques Pépin would say, “Happy cooking”!

*When power outages happen on the weekend, I always feel like some of my valuable time off got stolen.

A YEAR AGO: Haha! The power was off and I was project cooking then, too. ‘Tis the season?

FIVE YEARS AGO: The joys of Thai food and ballet.

TEN YEARS AGO: A beautiful Fall.

FIFTEEN YEARS AGO: The unforgettable Hotel Hell in Detroit. ~Shudder~