Our little corner of the world, while not crime-free, is pretty close to it. At the old house, I used to leave the doors open when I went to work, and none of the doors had locks. My current house does have locks, but they are unused. We leave the keys in the car at home (though not in town). Generally, it’s not something I worry about day to day. So it was big news that there was someone breaking into empty vacation rentals around here* and stealing food, booze, and miscellaneous items.

The miscreant was identified, and generally referred to as the “Red-Bearded Burglar” or “Redbeard”. There were sightings and incidents from Elk (home of Queenie’s and the fabulous Eggs Benedict) to Albion (home of Self and entire family). Redbeard shot at law enforcement, and was caught on camera entering houses with a camera in one hand and a flashlight in the other. Although he started his one-man crime spree in May, and has been within sight (and shooting distance) of law enforcement, he remains uncaught.

Not long ago, my sister told me that someone had gone through all the mail in their mailbox, but had left it there. She suggested that I ask on the message boards if anyone else had experienced that problem. It appeared that no one had. A couple of people unhelpfully (and somewhat snottily) suggested that we get a post office box, which we have had for decades, but no one admitted to any malfeasance in their mailbox.

Soon after that, our brother noticed that there were odd arrangements of stones and twigs on the pathway that goes between the property driveway and the haul road, like crazy art installations.

And a little later after the discovery of the impromptu al fresco art exhibit, Redbeard hit.

He took cigarettes and candy from the cars, and canned and preserved food from our brother’s van, which Jonathan was readying for a road trip. He also took Jonathan’s silk long underwear, Smartwool socks, and nearly all of the pesto, chicken, and garlic butter from the body freezer in the carport where the mechanic’s pit and washer and dryer are.

So it seems that he started by digging through the mailbox, then presumably watched for a while, and then struck. It’s scary to think of him spying on my family, especially knowing that he is armed and has used a weapon against the sheriff’s office. It seems that he is very comfortable in the woods, and gets around on a bike. So I guess he had quite a feast in the woods with all our food. The pesto is irreplaceable at this time of year. No more until next year.

My siblings called the sheriff’s office, and they responded in force, an unusual sight: 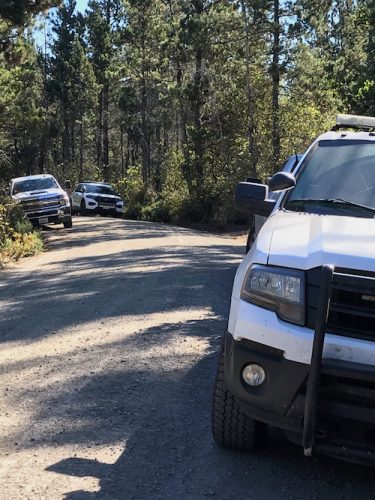 This is probably half the law enforcement on the coast. They put up cameras, but didn’t catch him. So far, he has yet to return, and I hope he never does. I’m beginning to wonder if they will ever catch him. I would feel a lot better if he were behind bars.

*Of which there are many. There has been a debate raging on the local message boards lately about how there are so many vacation homes here but so few rentals available to locals.

A YEAR AGO: The weather said summer, even if the calendar said fall.

TEN YEARS AGO: Celebrating my second anniversary in Hootervile with my sister and our beloved Schatzi. I miss her and Star so much.

FIFTEEN YEARS AGO: The Lovely Rita was busy charming all and sundry. It was her superpower. I miss her, too. Side note: I notice all my past dogs are girls.

TWENTY YEARS AGO: Missing my Sunday morning emails from Dad.