That always reminds me of Rhoda’s apartment, which I thought was just about the coolest place ever. I still do. I would love to have that place with the terrace and the Franklin stove in New York City. I also think Rhoda had such great style. But then, you all know that I’ve always been Team Rhoda.

You can file this entry under “Miscellaneous” (though I don’t have a “Miscellaneous” section on this blog. Of course, I don’t file very often, either, other than my nails. I was looking something in my file pile the other day, and discovered that there are some documents in the teetering stack that date back to 2019), since it’s just some random things and stuff that have happened lately.

While we were all pretty excited to see the rain, its novelty was swept away in another atmospheric river, which also swept away my power early on Sunday morning, when it still looked pretty much like nighttime, no matter what the clock said. And when the power went out, the clock wasn’t saying much of anything.

Ever since the ordeal of the PSPS, I have found that power outages get old fast, with their coldness and darkness. I definitely feel more sadness and reaction to outages than I used to. I seem to be somewhat in denial, too, since I found I was a little unprepared. I could only find one lantern in the Closet of Doom (spoiler alert: I still haven’t cleaned it out or organized it), and it needed new batteries. At least I could find my book light and it was still functional, allowing me to finish reading Alice Feeney’s twisty and suspenseful Rock Paper Scissors in the dark and silent house.

Outside, it was simply tipping it down, as my stepmother used to say. Megan was keeping track of the rainfall: 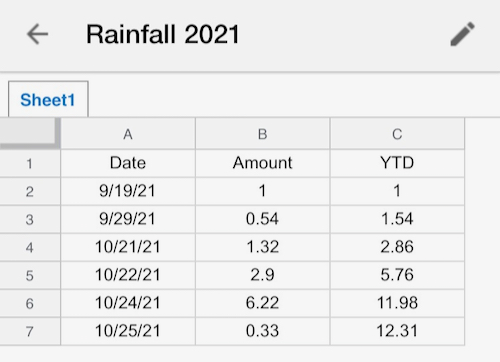 As you can see, we got more than six inches (!) in one day, and we are already at more than 12 inches for the season. The good news is that we are at about 300% of whatever “normal” is for this time of year. I’m hoping for a rainy winter, but not more power outages.

I was leaving work one day when I noticed a sort of scrapy sound as I exited the parking lot. Arriving home, I investigated Wednesday for the source of the noise, and discovered that something had come unstuck or unpinned or something on her undercarriage: 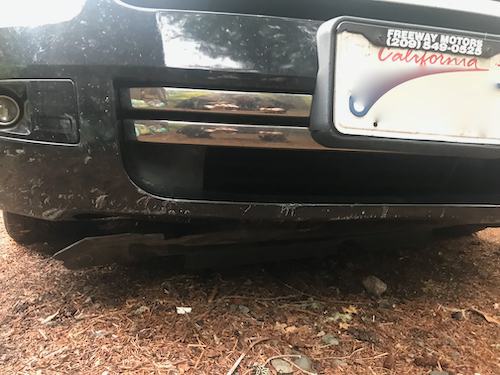 I texted the photo to Megan so she could consult with Rob. His opinion was that he could fix it, so I headed to the property after work one day. On my way, I stopped in at the post office, and on going back to my car, I was stopped by a kindly woman who alerted me to the unseemly fact that Wednesday’s underwear was hanging out. I thanked her and explained that I was on my way to my brother-in-law’s place to get it repaired. I feel lucky to live in a place where people care enough to tell me that something’s wrong with my car.

Rob set to work on Wednesday while Megan and I hung out in the garden and watched Stella and Millie play together. Millie has come a long way since her arrival a couple of months ago. She now plays with Stella, but is still basically horrified by every human other than Megan, and as a Plan B, Rob. The rest of us she eyes with deep suspicion. Not sure if or when she will get over that, but at least Stella finally has the playmate of her dreams. Star didn’t play with Stella, so she’s been waiting for someone to play with for a long time. Star’s absence is still felt strongly, but it’s good to see Stella happy and her goofy self again.

So far, no more sightings of Redbeard, unless you count this Halloween decoration on the Ridge: 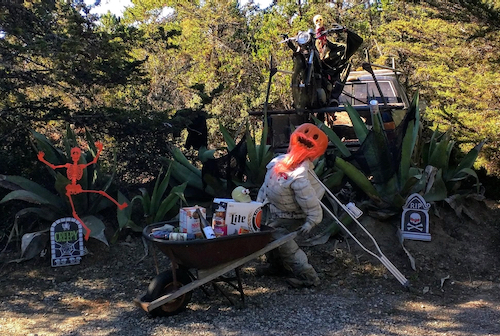 Let’s hope it stays that way. The police cameras are still active, and there’s also a Ring camera. I wonder if passing deer and other wildlife will cause more Ring notifications than they’d like, but hopefully it help to keep the miscreant away, too.

A YEAR AGO: John’s cat Willow and her kittens! Kittens Daisy and Peach are all grown up now, but as cuddly as ever. John continues his rescue work, neutering and fostering, getting homeless cats adopted as much as he can.

FIVE YEARS AGO: Making cider from our very own apples.

TEN YEARS AGO: My newest neighbor was a horse.

FIFTEEN YEARS AGO: Curious about my readers. It was one of those posts where the comments rapidly devolved into something else. Sometimes, I miss allowing comments.

TWENTY YEARS AGO: Getting my beautiful diamond watch repaired. Amazingly, the photo links still work, though they are on the teeny side. Note to Self: I should wear it more often. It’s gorgeous.