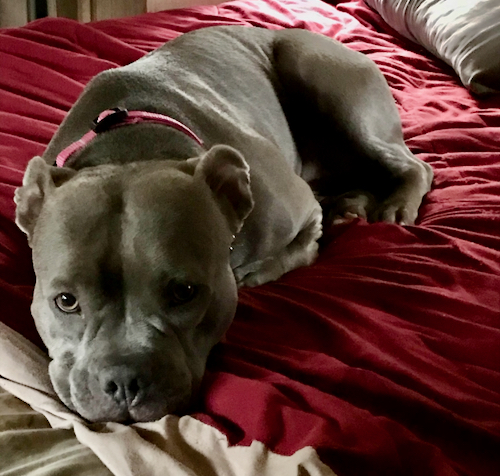 Faithful readers may remember how depressed the usually irrepressible Stella was after Star’s sudden death back in March. She kept returning to the spot where Star died for days afterwards, and she lost her bounce.

The unbouncedness of Stella caused Megan and Rob to start looking for a companion for Stella long before they were really ready to do so. Stella’s sadness just added to the hole in the household left by Star. I have to admit that until she was gone, I didn’t realize that she was so very much the heart of their home.

It’s just as well that they started the search when they did, because it took a very long time to find the right dog and then to get through the lengthy adoption process. The winner was a 2 year old mini Stella named Millie. Millie was staying with a foster family in distant and sweltering Sacramento, so Rob, Megan, and Stella all made the trek to meet Millie in the 110 degree heat.

Despite the journey and the unreasonable weather, everyone decided that Millie was the perfect addition to the family. There were just a few (dozen) formalities and hoops to jump through, ranging from paperwork to insurance to home improvements, but finally the day arrived when Millie was to arrive at her new home. Mille’s chauffeur was supposed to inspect the premises and make sure they were up to standards before finalizing the adoption, so Megan made snacks, tidied up, and had fresh flowers and a sign ready to greet the new arrival: 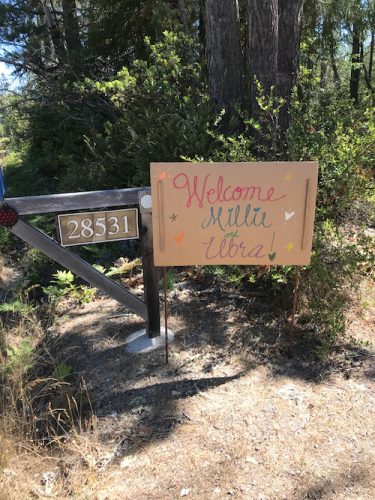 However, the chauffeur made the mistake that people often do by underestimating the drive and relying on technology that does not work out here in what my stepmother used to call “the back of beyond”, where cellphones often don’t work and GPS sends you on strange routes that go everywhere except where you actually want to go.

They were supposed to arrive at 4:00, but at 7:30 they had not arrived. They finally contacted Megan from Navarro, and she met them at the Hooterville store after dark. So much for the grand tour of the property, the garden, the snacks, and everything else.

But Millie had arrived!

Millie was/is a super shy dog, and so far, Stella’s dreams of playing with her have gone unfulfilled, at least for now. But they both sleep in the bed, and if Millie isn’t ready to play with Stella yet, she is happy to lounge on her new sister: 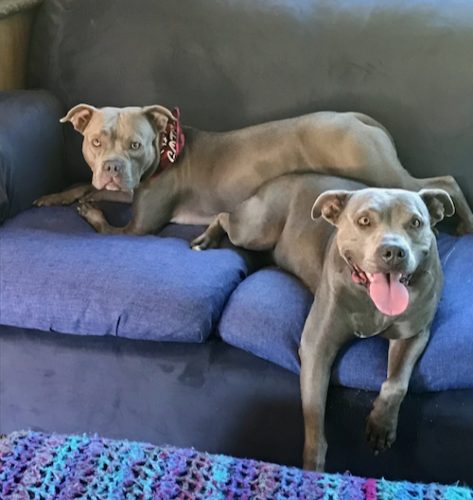 Millie is adjusting to her new life. She enjoys the dog beds in the garden and is beginning to explore a little. I really think she has made a lot of progress in the short time they have had her. Stella’s calm and affectionate nature made Star feel much happier and safer, and I think she will have the same effect on Millie.

Welcome to the family, Millie!

FIVE YEARS AGO At the circus with our beloved ben. Guess what? Ben is set to become a father around Christmas!

TEN YEARS AGO A midnight call.

TWENTY YEARS AGO: The Rufus Report.