Flush with my success in making canelés de Bordeaux, I decided to try my hand at char siu, or Chinese BBQ pork. It’s one of my favorites, and always order it when I get Chinese food. Much like I learned to read at the age of three so I could get stories when Dad wasn’t around to read them to me, I decided I would see if I could make my own char siu so I could have it without going to a Chinese restaurant near (25 miles) or far (2 ½ hours’ drive) away.

First, I had to procure a couple of things, like a roasting pan with a rack in it. The rack has also come in handy for things like cooling off canelés de Bordeaux while maintaining their crispy shell. I also got some five spice powder, red food dye, and molasses. I had pretty much everything else on hand.

I wavered over the red food dye for a while. At first I thought, It’s carcinogenic! And then I thought, It was almost certainly in every other order of char siu I have ever eaten, and it will make it look more authentic, so I decided to just go for it. You only use a little bit, anyway.

Here’s the recipe I used. I have to say it turned out very well: 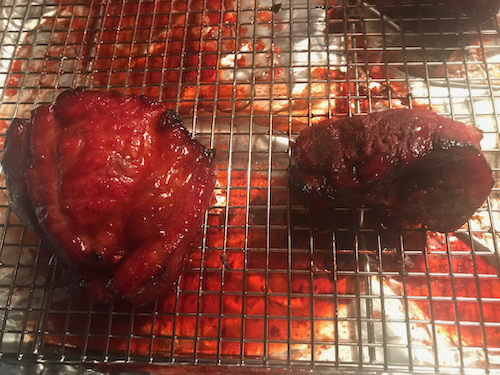 And it was utterly delicious. Even my best friend A was impressed, and she is Chinese. She immediately wanted the recipe.

I made egg rolls to go with the char siu, though I failed to take photos of the egg rolls. I enjoyed rolling them as I watched the deer and butterflies go past the kitchen window. I had ponzu dipping sauce imported from the Asian grocery in Santa Rosa for the egg rolls, and I also made salad from cucumbers my sister gave me, tossing them with sesame oil, sesame seeds, and rice vinegar. All in all, a successful foray in cooking.

A YEAR AGO: Rearranging the kitchen.

FIVE YEARS AGO A visit from our beloved Ben. I am pleased to announce he is set to get married next year and is expecting a baby for Christmas with his fiancee Erica.

FIFTEEN YEARS AGO: A visit with Dad, circa 1991. Even back then, those were the day.

TWENTY YEARS AGO: I was heading home to San Francisco after my father’s funeral in London.