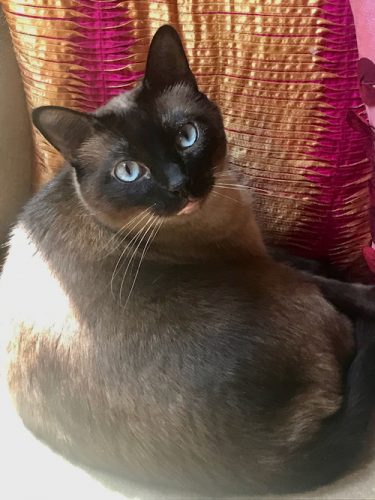 Or five-ish, at least. The vet estimated that he was around two years old when I adopted him three summers ago. I gave him my much-loved American grandfather HoHo’s birthday, May 11, since HoHo loved cats, and he and Dodge are both mischievous, loving rascals who brought love and laughter to me and are eternally happy and optimistic. I think HoHo would be crazy about beautiful, happy little Dodge* and would enjoy his antics.

Lately, I’ve been wondering why Dodge chose that particular day to follow my co-worker home. The employees at the eponymous car dealership had seen him around for weeks (yet they did not see fit to give him food or water, or even call the Humane Society), and he was homeless long enough to be starved, flea-ridden, and partly bald from exposure, even though it was summer. So he was out there for quite a while. What made him decide to follow Susan home that sunny summer day?

I’ll never know, but I do know that he bounced back from life on the streets remarkably quickly. When I first brought him home, I thought he’d hide for days and be skittish, but instead, he napped for a few hours and then joined the family like he had always been there. He took one look at Clyde and decided that he was his new best friend. It didn’t take long to win Clyde over, and now they are inseparable.

Dodge has retained his sunny optimism, his adorable quirk of jumping and rubbing against my legs, his love of being petted, cuddling with Clyde, and basking in the sun. Clyde has adopted Dodge’s habit of pushing his head against me when being petted, and also of rubbing up against me when I’m in the bathroom. It’s fun to see them picking up each other’s little characteristics like that.

Happy birthday, little Dodge! You are a ray of sunshine and happiness. I’m so glad you followed my colleague home that day, just the beginning of our journey together. May it be a long and happy one.

*HoHo’s last car was a red Dodge Dart. He told me that he had always wanted a red car, and it was about time. So I think he would like Dodge’s name, too.

A YEAR AGO: Mother’s Day is a complicated thing for me.

FIVE YEARS AGO: The mystery of the cat in the night.

TEN YEARS AGO: The bumpkinization of Suzy.