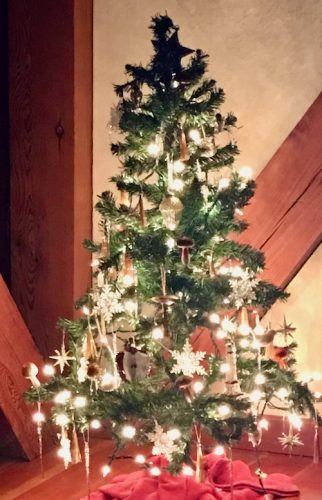 I may have been early in putting up my tree, but I am late in taking it down. Twelfth Night, aka The Saddest Day of the Year, has come and gone, but the tree is still standing, and I am still enjoying its comforting glow when I come downstairs on these dark winter mornings and during the long winter evenings*.

I was planning to take it down late, anyway, but it’s a longer reprieve than I expected. My plan was to take it down on the 8th, and at the same time do at least some preliminary organization in the Closet of Doom, starting with putting the holiday ornaments in the back, under the stairs, the least accessible part, and then assessing where the rest of the stuff should go and what could go up in the water tower.

Instead, I ended up in dental hell, where they are going to start charging me rent if I don’t look out.

Late on Friday afternoon, it started to feel like something was brewing on the right side of my mouth, the side most popular for crowns and root canals. Do I have any undoctored teeth left there? Apparently I do, because by the time I got home, it was screaming. I had taken Advil when I first felt the grumblings, but unlike during my other dental (mis)adventures, the pain just laughed at it and suggested it try again later.

Liver be damned, I took more Advil, but the pain was undefeated. At this point, I was actually crying with the pain. I texted my doctor, who responded that she would call in a prescription for antibiotics, but since the pharmacy was closed, I would not be able to get it until Saturday, aka the day I was planning to deal with the Tree and the Closet.

I texted Megan, who magically, somehow, came up with antibiotics and pain reducers (I know know that painkillers do not in fact kill pain, only reduce it, which is one of the major disappointments of my adult life), and went to meet her in town outside the ER to get them. Knowing her sister’s silliness, she also provided me with written instructions and the advice to eat something and get some ginger ale in order to keep all the pills swimming in my stomach.

It was a long night with the terrible pain – worse, somehow, than when my face was giant – but after the second dose of antibiotics, I began to feel semi-human again. A trip to the dentist revealed that the culprit was my wisdom tooth, which apparently needs to be evicted, a horrifying prospect. Stay tuned for more on that.

So far, I am unimpressed with the New Year. It needs to try harder.

*I have noticed that it’s not pitch dark at 5:30 anymore. We are returning to the light!

A YEAR AGO: An unappreciated visitor.

FIVE YEARS AGO: In the midst of a long and cold power outage.

TEN YEARS AGO: Some technical difficulties.

TWENTY YEARS AGO: Carrie’s new baby. Who I now realize is, uh, a grown-up.